New South Wales is the Australian state worst affected by a series of catastrophic fires.

INTERNATIONAL NEWS - The death toll from devastating bushfires in eastern Australia has risen to four after a man's body was discovered in a scorched area of bushland, police said Thursday.

Three others have perished in bushfires in New South Wales, the state worst affected by a series of catastrophic fires that broke out along the eastern seaboard late last week.

Residents found the body - believed to be a 58-year-old man last seen on Friday - near the New South Wales town of Kempsey, one of several areas hit by the fires in recent days.

More than 100 blazes were burning on Thursday but a respite from tough conditions has seen the danger from many fires downgraded and residents returning to sift through the remains of their homes.

Hundreds of houses have already been damaged or destroyed and more than one million hectares (2.5 million acres) of land burnt in the blazes.

Challenging conditions were expected to flare again in Queensland and New South Wales at the weekend as the temperature rises and winds pick up, and many blazes are still proving difficult to contain.

In Burrell Creek, dozens of firefighters were preparing to battle an out-of-control bushfire that has so far engulfed 24,000 hectares from the coastal town of Old Bar inland to Hillville in northern New South Wales.

Native wildlife has also been badly hit by the bushfires, with conservationists estimating that hundreds of koalas have perished.

As many as 350 koalas died in a single nature reserve near Port Macquarie alone, raising fears for the future of the creature in the area.

Nick Boyle, of Taronga Conservation Society, said "our hearts are breaking" not only for the victims but also for the "defenceless wildlife" that had been killed by the state's "earliest and worst" bushfire season.

"Pressures on the koala were already compounding," he said, citing habitat loss and non-native predators. "And now this."

Bushfire-prone Australia is experiencing a horrific start to its fire season, which scientists say is being exacerbated by climate change.

The Bureau of Meteorology says human-caused climate change is increasing the "frequency and severity" of dangerous bushfire conditions by raising temperatures, sapping moisture from the environment and causing an earlier and more extreme fire season.

The bushfires have created mounting pressure on the conservative government to curb fossil fuels and cut greenhouse gas emissions.

Australia's leaders, ever-conscious of the country's economic reliance on mining exports, have been steadfastly ignoring those calls. 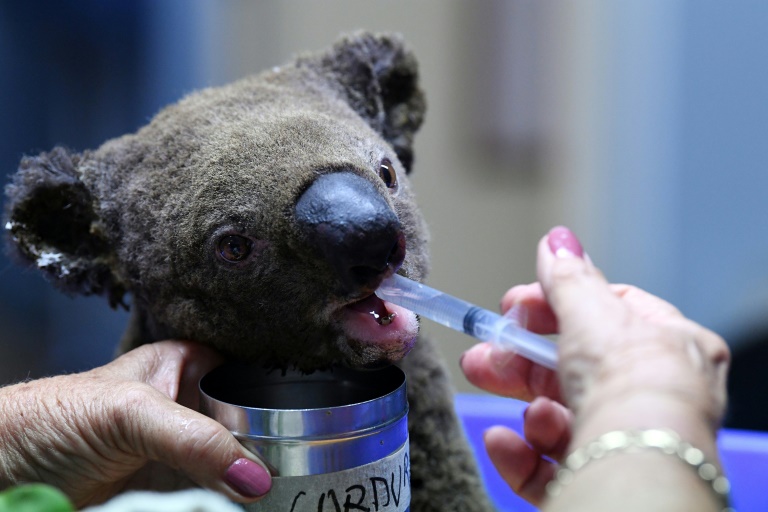 Native wildlife has also been badly hit by the bushfires, with conservationists estimating that hundreds of koalas have perished.