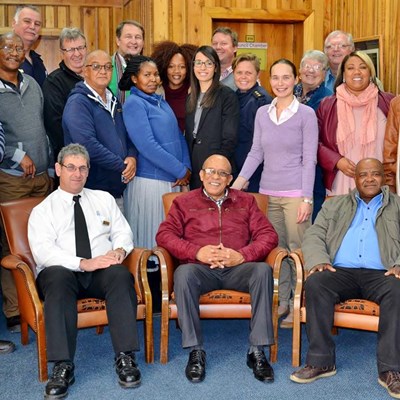 The group of newly appointed peace officers. Photo: Nickey le Roux
MOSSEL BAY NEWS - The Mossel Bay Municipality officially appointed a group of employees as peace officers during a ceremony held recently where they were presented with appointment cards. The main task of these peace officers will be to promote peace among communities through the effective implementation of municipal bylaws and to act immediately and lawfully to prevent any unlawful situation.

Member of the Mayoral Committee Councillor Nicolas Booisen presented each peace officer with an appointment card which will authorize their action to immediately issue warnings, fines and summonses and arrest unruly community members if and when needed.

Booisen emphasized the important role peace officers have within society. Booisen stressed that peace officers even on occasion have to act as tourist guides who market the town to all visitors.

The Executive Mayor Alderman Harry Levendal added: “We don’t know how to thank you enough for what you have done. It’s an unselfish act, as you put our lives before your own and that of your families. You are an indispensable part of the Mossel Bay Municipality.”