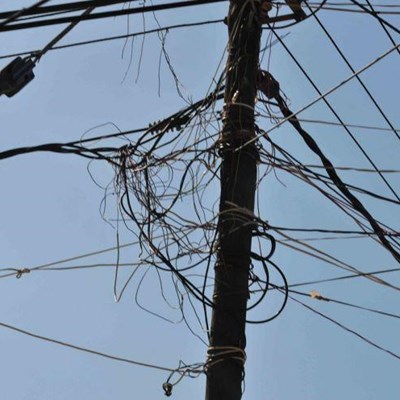 Generic image.
MOSSEL BAY NEWS - Mossel Bay Municipality's fight against the illegal use of electricity continues unabated. Illegal wiring and electricity theft is increasing in many of the areas within the municipal boundaries.
During the last year, the municipality's electrical department responded to complaints from residents about electrical faults and 1 100 illegal supplies were disconnected in 32 operations. Nevertheless, various contraventions, ranging from illegal power connections to meter tampering, meter bypassing and illegal electrification are ongoing.
Despite the death due to electrocution of at least four people, three of whom were children, in the KwaNonqaba and Asla Park areas in the past year, residents still do not heed the call not to tamper with electricity supply.
Electrification of informal houses is funded by the Department of Energy through the national electrification programme, and only areas that are proclaimed and suitable for settlement are electrified.
Dick Naidoo, the municipal director of Technical Services, says: "It is imperative that consumers adhere to the legal requirements for the safe use of electricity as stated in the electricity supply bylaws and the electricity installation regulations of the Occupational Health and Safety Act (1993).
Electricity theft makes it difficult for the municipality to manage the demand and supply, and this contributes to the frequent power failures in some areas."
He appealed to residents to note that the illegal use of electricity has several negative consequences, and advised that lengthy prison sentences may result.
It is illegal to resell electricity and Naidoo says residents should be alert and look out for criminal syndicates who often pose as legal providers who offer services at a fee.
"The electricity user is responsible for the safe use of electricity and must, according to the electricity installation regulations of the Occupational Health and Safety Act (1993), ensure that any extensions, modifications and repairs to installations are undertaken by an accredited electrical contractor."
It is illegal for residents to lay extension cables from the electrical distribution board to other customers for the sake of distributing electricity to buildings on adjoining properties. Equally, it is illegal to use non-SABS material for electrical installations.
Bypassing the municipal electricity meters and protective devices is not only illegal, it is dangerous. Electrical distribution boards or circuits that are not properly labelled can cause serious accidents. Nobody is allowed to work at municipal supply points.
Most domestic installations are restricted to 60 amp supplies and do not make provision for the redistribution of electricity because this could result in overloading, causing tripping of the municipal circuit breakers and result in power failures.
Customers should note that electricity supplied to an installation under a specific tariff cannot be used for a purpose other than as contemplated by that tariff. Changes to a customer's electricity supply point without the relevant municipal consent is strictly prohibited.
Any illegal use of electricity may be reported to the municipality's Electrical Department (044 606 5000).
ARTICLE: NICKEY LE ROUX, MOSSEL BAY ADVERTISER NEWS EDITOR
'We bring you the latest Mossel Bay, Garden Route news'