Skyrocketing food prices leading to a struggle at the till

The rest of the country is trying to get back to normal, but poor people are struggling more than ever, eating less and buying less nutritional food.

The women expect the next few months are going to be very difficult with the prices of everything already extremely high and continuing to increase.

BUSINESS NEWS - Poor people are getting hungrier while the rest of the country is trying to return to some kind of normal.

Mothers are buying low-quality starch to keep tummies full while meat and fruit becomes unaffordable. Housebreaking is becoming more common as hungry people steal food and anything else that can be sold for cash or food.

This sad picture is painted by the April 2021 Household Affordability Index of the Pietermaritzburg Economic Justice and Dignity Group that tracks food price data from 44 supermarkets and 30 butcheries in Johannesburg, Durban, Cape Town, Pietermaritzburg and Springbok in areas where poor women shop for their families.

The index shows that: 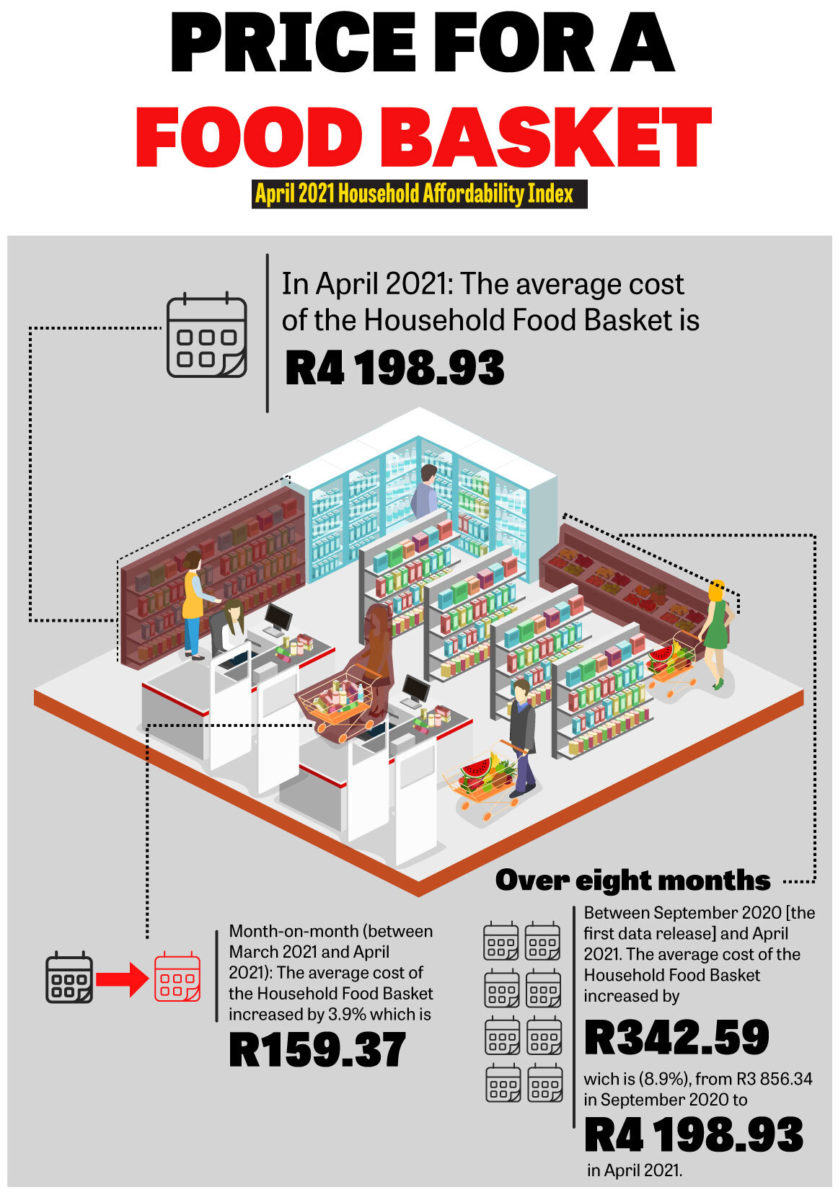 The food price data for April 2021 were collected before the fuel price hike and increased fuel levies came into effect on 7 April 2021 and also before the new electricity tariff hike of 15.63% comes into effect.

This means that the full impact of these increases is still coming. The group predicts that based on the upward trend in food prices, food prices will increase by more than 10% this year with the increases in fuel and electricity input costs.

How poor women handle these increases

The group says the poor women who gather the price data indicate they:

While some households are suffering extreme hunger, they are still in the minority. However, the women say they are seeing more and more pockets of people, especially larger families and single women relying on child support grants, as well as marginalised men with small families who rely on the Covid-19 relief grant starting to go hungry.

They say these pockets of hunger will continue to expand and “when hunger starts coming in, a neighbour is going to support another neighbour, but when both of you start getting hungry and a third neighbour and fourth neighbour starts getting hungry, it starts a horrible ball rolling that you cannot stop.”

This scares the women very much. They note that petty crimes in their areas are escalating with people stealing food and items that can be sold. They are doing things out of desperation they would never have done before.

The women expect the next few months are going to be very difficult with the prices of everything already extremely high and continuing to increase. They are also worry about their children who are struggling due to the rotating school system and learning very little.

They are also struggling more than ever to find work and those who had a job before Covid-19 and were able to retain it now work shorter hours and had their pay cut. After paying for transport and electricity, families are left with almost nothing to buy food. It is almost impossible to get a job if you were previously unemployed and no work is available at all.

‘Government does not care’

The women say they are extremely angry with the government’s handling of education during Covid-19  and find it almost incomprehensible the government only increased the child support grant by R10.

They are also very worried for their friends and families who rely on the Covid-19 relief grant of R350, which helped although this is such a small amount. The women do not believe the government cares about them.