Widespread Spring rain and storms in the days ahead

NATIONAL NEWS - For fellow South Africans countrywide, a spell of fairly active weather is already unfolding, driven primarily by the development of a steep upper trough over the western and south-western parts of the country. A number of severe or extreme weather phenomena can be expected today and in the coming days.

Over the Western Cape, cold, overcast and windy conditions with heavy rain and localised flooding will dominate the circulation pattern.

Moreover, marine gales and high sea conditions will also affect much of the Western Cape coastline.

Elsewhere, the Greater Highveld region, encompassing parts of the Free State, North-West, Gauteng and eastern highveld of Mpumalanga, can look forward to a spell of early summer rain, in the form of scattered showers and thundershowers over the next two to three days.

A cold front accompanied by a steep upper trough is expected to make landfall over the Western Cape later this afternoon, resulting in isolated to scattered showers and rain in the south-west.

There is a possibility of localised flooding of susceptible roads and settlements over the Overberg and Garden Route District Municipalities this evening. 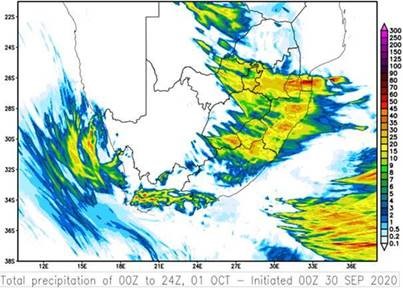 Isolated to scattered thundershowers are also expected over most of the eastern parts of South Africa, with a possibility of severe thunderstorms over the north-eastern interior (Gauteng, western Bushveld in Limpopo, Mpumalanga Highveld and the eastern parts of North West Province).

These thunderstorms could lead to flooding of low-lying susceptible areas, disruption to traffic due to reduced visibility and damaging winds that could result in damage to informal settlements.

Conditions favourable for runaway fires are also expected over the central and northern interior of South Africa today.

The upper trough intensifies and cuts off over the south-western part of the country tomorrow, resulting in further showers in the south and west as well as possible snow over the high-lying areas of the Western and Eastern Cape. Further snowfall may be expected over these regions on Friday.

Over the eastern parts of the country, thundershowers will continue tomorrow as well as on Friday, with the possibility of these storms becoming severe in places. As yet, there has not been the need to issue any warnings with respect to possible severe storms.

However, the general public can rest assured that weather developments are being monitored closely, using the South African Weather Service (SAWS) dedicated weather radars and Lightning Detection Network (LDN). Should the need arise, radar-based warnings will be issued accordingly for areas considered to be most at risk. 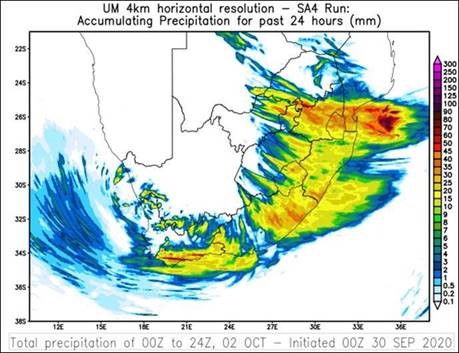 Coastal ocean users should also exercise caution, with very rough seas expected as a result of strong winds associated with this system. These winds are likely to result in steep waves reaching heights of 5 - 6 metre at times. It should be noted that these steep wind-seas will cause an unusual dominant wave direction.

Combined with the underlying south-westerly swell, chaotic, confused seas should be expected.

Small vessels may experience difficulty in navigation, and risk is increased for coastal activities such as rock angling and beach-use. Spring high tide, peaking late this week, may exacerbate these effects by increasing the reach of the waves onto the coastline.

35 %
NO: I believe the earth is only thousands of years old. The accuracy of dating methods used in studies is debatable.