A spokesman for the Spanish government delegation in Ceuta said the scale of the influx, which comes at a time of high tension between Madrid and Rabat, was unprecedented and could yet rise.

Some of the migrants swam into the Spanish enclave.

INTERNATIONAL NEWS - At least 5,000 migrants, about a thousand of them minors, reached Spain's North African enclave of Ceuta on Monday from neighbouring Morocco, Spanish officials said, a record in a single day.

A spokesman for the Spanish government delegation in Ceuta said the scale of the influx, which comes at a time of high tension between Madrid and Rabat, was unprecedented and could yet rise.

The migrants had reached the enclave by swimming or walking at low tide from beaches in neighbouring Morocco a few kilometres to the south, he said. One man drowned on the journey.

During the morning, the delegation put the number at 100 arrivals, saying they were mostly young men but also included children and some women who had used inflatable swimming rings and rubber dinghies.

Others were able to almost walk there when the tide went out, the spokesman told AFP, with the numbers climbing rapidly throughout the day.

After being checked by the Red Cross, the migrants were taken to a reception centre on the beach of El Tarajal, with authorities meeting to discuss how to handle the situation given the record arrivals.

Videos posted on social media showed the stream of migrants - some wearing just beachwear but others clad in normal outdoor clothes - setting off from rocky beachheads.

At first, Moroccan police looked on, before moving to push back a gathering crowd of onlookers.

Spain's interior ministry said in a statement Monday evening that "immediate reinforcements of the civil guard presence and national police" would be sent to Ceuta, totalling 200 officers.

It added that "Spanish and Moroccan authorities have recently reached an agreement concerning the return to their home country of Moroccan citizens arriving on the beach" at Ceuta, and that authorities from the two sides were in "permanent" contact.

Contacted by AFP, Moroccan authorities had yet to respond on Monday evening.

During the last weekend of April, around 100 migrants swam to Ceuta in groups of 20 to 30. Most were deported back to Morocco.

Ceuta, together with Melilla - Spain's other North African enclave - have the European Union's only land borders with Africa, making them popular entry points for migrants seeking a better life in Europe.

Migrants try to reach the enclaves either by swimming along the coast or climbing the tall border fences that separate them from Morocco. 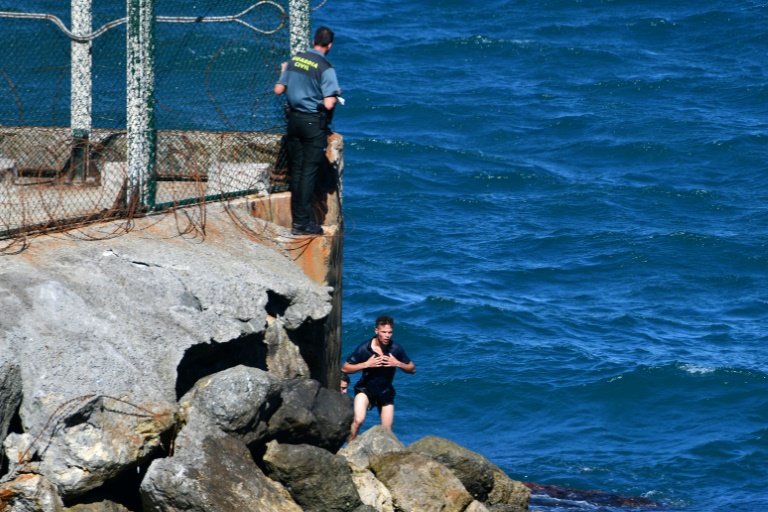 Migrants try to enter either by scaling the tall barrier fence or swimming.

Figures published by Spain's interior ministry show that between January 1 and May 15, 475 migrants reached Ceuta by land or sea - already more than double the 203 that arrived in the same period last year.

Mohamed Benaissa, president of the North Observatory for Human Rights group at Fnideq, a handful of kilometres into Morocco, said the bulk of those making it to the Spanish side were "minors, youths but also families, all of them Moroccan".

The wave of arrivals comes at a time of diplomatic tension between Madrid and Rabat after it emerged that Polisario Front leader Brahim Ghali arrived in northern Spain in mid-April and is being treated in hospital for Covid-19.

The Polisario Front has long fought for the independence of Western Sahara from Morocco, and analysts have warned the spat could threaten bilateral cooperation between Madrid and Rabat in the fight against illegal immigration.

Benaissa said Monday's influx "could be linked to the diplomatic crisis between Morocco and Spain".