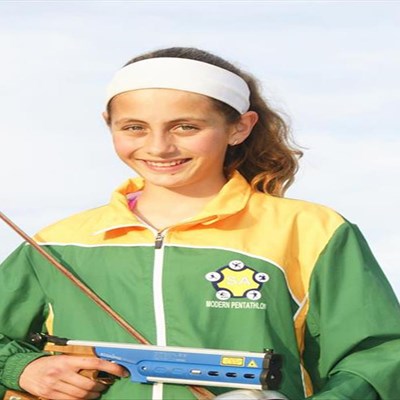 She achieved a silver medal in the Western Cape championships and went on to win a bronze medal at the South African Tetrathlon Championships held in Paarl in April. The SAMPA selection team chose her to be part of this prestigious group of youth athletes and the aim is to groom them for the Youth Olympics and 2020 Olympics in Tokyo, Japan.

The Youth High-Performance Group left on 16 August for Cairo, Egypt, for a 10-day training camp with the Egypt National Pentathlon Team and their plethora of skilled coaches. Their programme will focus on fencing and swimming. Time will also be spent on laser shooting techniques.

Tetrathlon consists of swimming, fencing and a run-shoot combination (laser run). Linél participated in tetrathlon for the first time in 2017 without having had formal fencing training and was placed second in the fencing points standings. She has participated in biathle and triathle in the Eden district since the age of nine.

Laser Run was introduced in 2015 and she went on to compete in the SAMPA Federation Team at the World Laser Run Championships in Lisbon, Portugal, in September 2016.

She has recently joined Eden Fencing in George under the tutorship of well-known fencer, Susan Agrella in the Epeé discipline. Her natural sporting talent and sheer determination make her a formidable opponent. The Union Internationale Pentathlon Moderne (UIPM) 2017 Senior World Championships take place from 21 to 29 August and the athletes will have the opportunity to train alongside some of the current world and Olympic champions.