For most goalkeepers the chance only comes when the situation is dire and time running out and desperate coaches wave their goalies forward, as the Liverpool bench did on Sunday.

FOOTBALL NEWS - After Alisson Becker headed in a 94th minute winner for Liverpool against West Brom on Sunday his manager Jurgen Klopp declared: "It's the best goal I've ever seen scored by a goalkeeper!"

Becker has some competition for that prize.

Plenty of goalkeepers have scored with a spectacular punt from their own penalty area.

Some, like Brazilian Rogerio Ceni, who scored more than 130 goals in his career, or Jose Luis Chilavert and Rene Higuita, were dead ball specialists.

For most goalkeepers the chance only comes when the situation is dire and time running out and desperate coaches wave their goalies forward, as the Liverpool bench did on Sunday.

Alisson's deft header on could be worth millions to his club as it kept alive their late charge for a highly lucrative place in next season's Champions League.

Here, AFP Sport picks some of the most spectacular, and important, goals scored by the men whose job is usually to prevent them.

- Higuita had a flair for the spectacular. Less than a month before his famous scorpion clearance as Colombia played a friendly against England at Wembley, he contributed a far more significant flourish in Medellin to propel his club towards the Copa Libertadores final.

He smashed in the only goal of the game with a 51st minute free kick that flew over the wall, crashed into the underside of the bar and flew down into the goal.

Higuita hit the net again in the second leg, converting his team's first kick in a penalty shootout which his team won 8-7.

- All eight of Chilavert's international goals came in competitive matches, two of them were against Argentina.

The rasping low drive with which earned Paraguay a draw in Buenos Aires helped propel them to a second-place finish in the South American World Cup qualifying group and a first qualification in 12 years.

- On the last day of the season, Carlisle needed to win to stay in the Football League.

With the scores level and four minutes of added time nearly up, they won a corner.

Coach Nigel Pearson waved the on-loan goalkeeper forward. When the ball dropped to him in the six-yard box, Glass slammed it home on the volley.

It was the last of the three games he played for Carlisle.

- Masuluke's spectacular volleyed overhead kick from the corner of the penalty area saved a point for struggling Baroka, but ultimately they were relegated anyway.

It deserves a place on the list because it was a strike of such unlikely beauty that it finished second in FIFA's goal of the year vote, behind an Olivier Giroud scorpion kick. 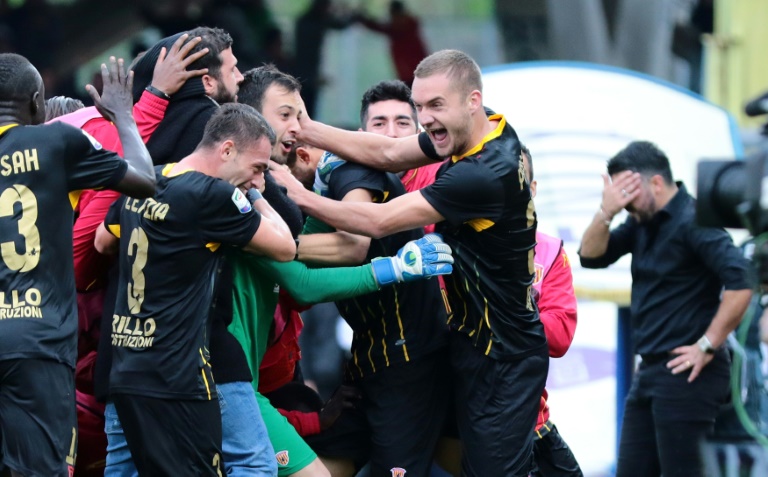 - Brignoli became another on-loan hero when he hurled himself at a 95th minute free kick against Milan.

The goalkeeper made contact just in front of the penalty spot. The ball hit the back of his head and rocketed into the goal to give Benevento a first-ever Serie A point after 14 straight defeats.

- When Gikiewicz rose at the far post to nod a last second equaliser he kept Union Berlin unbeaten early in the German second division season, but the point he won proved crucial when Union sneaked into third place.

They edged Stuttgart in the playoffs to reach the Bundesliga for the first time. They are still there.