Mohamed Salah (2L) puts Liverpool ahead in a 1-1 draw against Newcastle United at Anfield.

FOOTBALL NEWS - Mohamed Salah became the first Liverpool player to score 20 Premier League goals in three different seasons when he netted in a 1-1 home draw against Newcastle United at the weekend.

After bagging 32 league goals in the 2017-18 season and 22 the following campaign, the Egyptian reached the 20-goal mark this term, leaving him one behind Harry Kane of Tottenham Hotspur in the chase for the Golden Boot.

Salah was voted African Footballer of the Year twice and another former winner, Algerian Riyad Mahrez, was named man of the match after helping Manchester City beat Tottenham 1-0 in the League Cup final.

Here, AFP Sport rounds up the performances of Africans in the major European leagues:

Salah's stunning touch and finish to fire Liverpool into an early lead against Newcastle was not enough for the Reds, who conceded a late equaliser to see their chances of Champions League football next season fade. After scoring his 29th goal of the season in all competitions, the Egyptian and Mane were both guilty of wasting a host of opportunities.

Mahrez starred as City picked up the first silverware of the English season with the win over Tottenham. He came close with a number of powerful efforts off his favoured left foot and had a goal ruled out in stoppage time for offside.

Chukwueze's cool finish was not enough for Villarreal as Barcelona came from behind to win 2-1 at Los Carmenes and boost their La Liga title hopes. The Nigerian did well to steer away from Jordi Alba and calmly round Marc-Andre ter Stegen before slotting in from the angle for his third goal in as many games.

Nigerian forward Simy scored twice as Crotone delayed their Serie A relegation with a 4-3 win over fellow strugglers Parma, their first away win this season. Simy and Algerian Ounas scored either side of the break for the basement club. Ivorian Gervinho pulled a goal back for Parma to break his five-month scoring drought, before Simy slotted in the winner from the penalty spot on 69 minutes to bring his tally to 19 league goals this campaign. The 28-year-old has scored 29 Serie A goals to overtake ex-Inter Milan player Obafemi Martins (28) as the top-scoring Nigerian in the Italian top flight.

Moroccan full-back Hakimi missed chances in either half before teeing up fellow defender Matteo Darmian for the winner in a 1-0 success over Hellas Verona that put leaders Inter Milan on the brink of their first Serie A title since 2010. 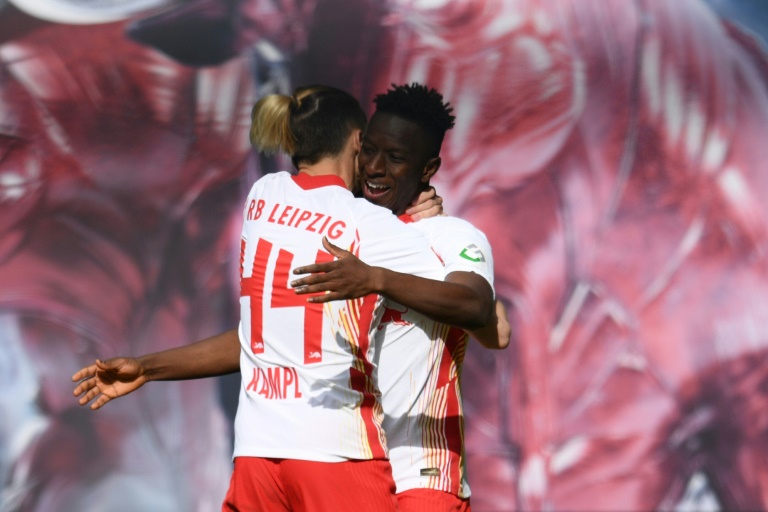 The Mali midfielder scored with a header just seconds after half-time as second-placed Leipzig made Bayern Munich wait to be crowned Bundesliga champions with a 2-0 home win against Stuttgart. A defeat for Leipzig would have confirmed Bayern as champions for the ninth straight season, but Stuttgart were reduced to 10 men after 12 minutes when their 19-year-old defender Naouirou Ahamada was shown a red card after he clattered Haidara. He then powered home a Dani Olmo cross to put Leipzig ahead.

The Algeria defender scored a first-half penalty as Moenchengladbach romped to a 5-0 home win over strugglers Arminia Bielefeld. The hosts raced into a three-goal lead after just 18 minutes before Bensebaini converted a spot-kick.

A goal from Algerian Slimani helped fourth-placed Lyon build a two-goal lead over Ligue 1 leaders Lille, who recovered to pull off a dramatic 3-2 triumph and stay one point above Paris Saint-Germain.

Tunisia captain Khazri put hosts Saint-Etienne ahead on 11 minutes in a mid-table clash with Brest, who hit back with a second-half brace from Gaetan Charbonnier, delivering a 2-1 victory.