KZN snake expert Nick Evans tells a slithery tale. Evans says the snake was the biggest and healthiest snake he has rescued in his career.

The Southern African Python, previously known as the Rock Python, is South Africa’s largest snake species, and can grow up to five metres in length.

NATIONAL NEWS - Sunday’s call-out to retrieve a “large snake” in Waterfall, Durban, turned out to be capturing a mammoth python.

KZN Amphibian and Reptile Foundation’s Nick Evans told Highway Mail the dramatic story of how he managed to capture it.

Val and Wolf Sperryn were driving home when they saw the large snake crossing a busy road.

How it got across without being hit is a miracle. They drove past, turned around, and pulled over to try and help, knowing the snake couldn’t be left in a residential area.

They saw it trying to get under a driveway gate, but it turned back and hid among some Iris’s.

They phoned a snake enthusiast in the area, Brett Markwell, who then phoned Nick Evans, who was just about to have dinner, but dropped everything and raced to the snake’s rescue.

“When we arrived, Val and Wolf were still standing watch. They were both very concerned for the well-being of the snake, which for me was nice to see. More people need such an attitude!”

Wolf, who used to catch snakes, and Evans stepped into the patch of Iris to try and locate the snake. Evans soon discovered the snake was about two feet in front of him. It was curled up, and its patterns and colours camouflaging it very well among the vegetation. 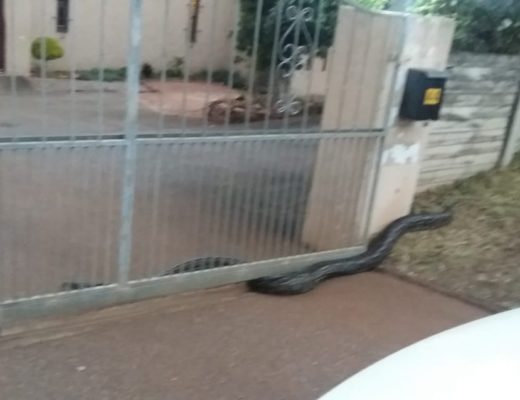 The python tried to slither under a gate but didn't fit.

“It soon grew irritated with our presence and started to move. Joelle was standing next to me when we saw the head appear out of the Iris’s, about 1.5 metres from where the body was curled up. We could now tell this was a biggie!

“I stepped closer to the head, as it slowly moved along. I paused, waited for my moment, and dived! I grabbed the head, but the python was so strong it just kept moving, with me holding on!

“I then weighed it down with my body weight in an attempt to stop it. It wrapped its tail around my left wrist. They do this when threatened, hoping the ‘attacker’ releases it, or it tries to pull its head free using the tail as leverage.”

Evans recalls how he struggled to stand up with the large snake in his hands. He got Joelle to lift the body up over his head and rest it on his shoulders, making it easier for him to stand up and walk out of the bushes.

Joelle helped Evans to hold the enormous python. When Evans walked out onto the verge, he placed the snake on the ground. It was surprisingly relaxed, barely moving.

“This species is notoriously grumpy when agitated. It lay so nicely that I let Val and Wolf come and feel the muscle of the beast that they had just helped save. I did hold the head to be safe, at first.

“After seeing how relaxed the snake was, I felt that I didn’t need to hold onto the head any longer. Wrong move! As I released the head it sprung into action.

“It tried darting off into the Iris’s. Joelle and I grabbed the tail and tried pulling it back out, but it was too strong! It was winning the tug-of-war! I let go and went after the head, which I soon secured. We took no chances after that, putting it straight into a bucket.”

The Dangerous Creatures and veterinary team at uShaka Marine World helped Evans weigh and measure it. It stretched out at 3.9 metres long, and weighed an incredible 31 kilograms.

Evans said he would usually expect to see a python of this size in rural areas or reserves, not suburbia, adding that it must have come from the Krantzkloof Nature Reserve.

In the reserve, the python would be feeding on Blue Duiker, Dassies, any other small mammal including the occasional monkey, and Monitor Lizard.

Facts about the species
The Southern African Python, previously known as the Rock Python, is South Africa’s largest snake species.

They can grow to over 5 metres, but specimens of such size are increasingly rare.

Female pythons are exceptional mothers, capable of laying more than 40 eggs. They will lay them in a large, abandoned animal burrow. Not only will she fiercely protect her eggs, but she will actually incubate them too.

The mother python will go out on sunny days and bask. Once warmed up, she will return to her brood, coil around the eggs and keep them warm at around 30 degrees Celsius.

Decades ago, big specimens were not uncommon. At the Bergtheil Museum in Westville, there are photos of huge pythons being caught in the Palmiet Nature Reserve in Westville.

A python has not been seen in that reserve for years and was presumed extinct. This is their status in many natural areas around Durban. 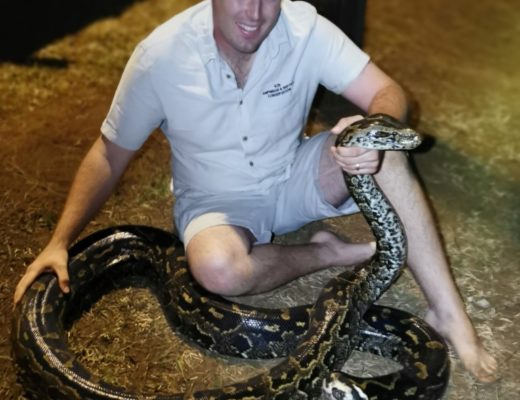 The species is sought after in the muthi trade, or it is often killed and eaten. Like rhino horn, factually, it serves no medicinal purpose, and so killing it is a real waste. They are also killed out of fear, as many snakes are.

Nowadays, pythons are seen in areas such as Inanda and Shongweni, where they are sometimes found to be eating residents’ chickens. They’re also found further west and north. They become more prevalent in large game reserves. They are still present in the Kloof gorge area.

This species is not venomous. However, it has rows of needle-like teeth, and so it can inflict a very painful bite. It deserves a lot of respect and should be left alone. If you leave it alone, it will not bite you, and it does not hunt people.

There have been historic records of enormous pythons eating children in wild areas, but Evans cannot remember when last there was a confirmed record of such an instance.

The specimen found in Waterfall would not target children. The same cannot be said about small dogs and cats, though.

On the very rare occasion, if one may find a python in a garden, call a snake-catcher to have it safely removed and relocated.

The species is protected by law and is illegal to kill, keep or sell.