Watson spent over 4 hours trying to track the crocodile down.

This crocodile caused quite a stir on the side of the N2 on Monday. Photo: Social media

NATIONAL NEWS - A small crocodile was spotted walking on the side of the N2 near the Umdloti turn off on Monday.

The sighting was the second in just over a week after an eagle-eyed motorist saw a 1.4m Nile crocodile on the banks of the Tongaat river on March 6.

This time, however, the crocodile was in uncharted territory on a busy highway, far from the comfort of the soft river banks of the Tongaat River.

Crocodile Creek owner, Peter Watson was alerted and quickly made his way to the highway in what ultimately became a fruitless search.

“We received a call at about 2pm and rushed to get to the highway to see if we could find the croc and rescue it before something happened,” said Watson.

The tip-off indicated that the crocodile was between Crocodile Creek and the Tongaat toll, but after a few hours of searching and dodging cars, Watson could not locate the animal.

“Every crocodile sighting between Richard’s Bay and Port Shepstone is assumed to be one of ours so people kept phoning all afternoon,” said Watson.

Watson spent over 4 hours trying to track the crocodile down.

The crocodile was eventually caught by an unknown passer-by and Watson was called off of his search at around 6.30pm.

ALSO READ: At least 90 crocodiles still at large after escaping from Mpumalanga dam

When asked where he thought the crocodile may have come from, Watson gave two possibilities.

“It could have come from the Umdloti River and walked up the grassy bank, but this would be extremely unusual behaviour.

“More likely is that it escaped from a passing vehicle while being illegally transported.

“People are going to say it escaped from Crocodile Creek, but unless it is breaking land speed records, there is no way it would not have been noticed when covering over 20 kilometres on foot on a highway.”

Be sure to keep one eye-open next time you’re on the highway, as the hitchhiking croc could soon make another appearance. 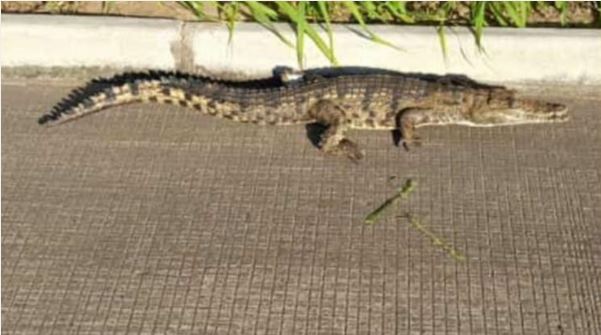 Be sure to keep one eye-open next time you’re on the highway, as the hitchhiking croc could soon make another appearance.