Our Amazon: Brazilians who live in the world's biggest rainforest

Luiz Medeiros dos Santos is a cattle breeder in Brazil's Amazon, a diverse region that is home to more than 20 million people.

LIFESTYLE NEWS - Cattle breeders, indigenous teachers and loggers are among the more than 20 million people living in the Amazon in northern Brazil, carving out a living from the world's largest rainforest.

Three residents of Para state talked to AFP about their lives and hopes for the region, where a surge in deforestation and fires this year has sparked a global outcry.

Luiz Medeiros dos Santos is a passionate cattle breeder in Ruropolis. But nearly two decades after clearing 50 percent of the trees on his ranch, the stocky rancher admits he made mistakes.

"When I arrived here, I committed errors against the environment," Dos Santos, 63, tells AFP, sitting on the veranda of his wooden house surrounded by a lush lawn and a garden in bloom.

"I cleared hillsides that today I can't work and I had to leave to reforest." 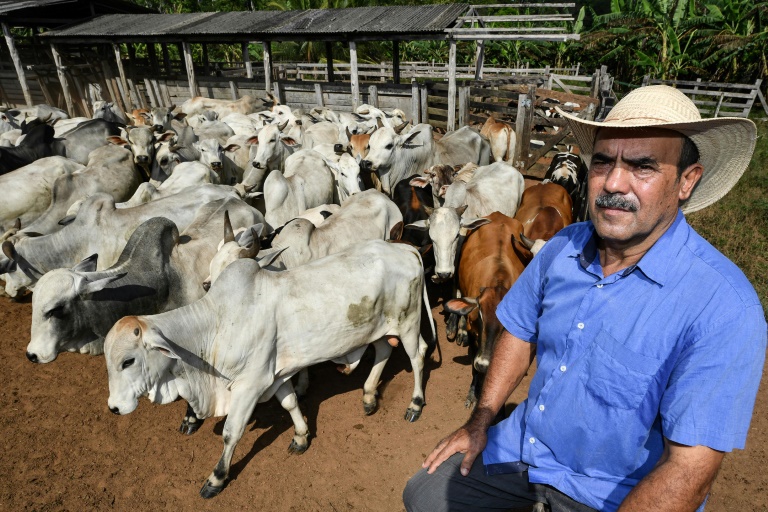 Cattle breeder Luiz Medeiros dos Santos admits he made some mistakes in how he cleared his ranch, errors that hurt the environment.

Dos Santos grew up in Brazil's grain-growing southern state of Parana and moved north after the construction of the BR230 and BR163 highways, which opened up the remote Amazon region to cattle ranches and soy farms, fueling deforestation.

Their block has been transformed since they bought it - thick rainforest has been turned into pasture where they have 150 cattle for breeding. Half of their land is leased to local grain producers.

Laws at the time permitted landowners to clear 50 percent of their land, which Dos Santos says in hindsight was too much. Now they are restricted to 20 percent.

"There needs to be a greater awareness among people about preserving the Amazon, not destroying it," he says in a baritone voice, as he and Maria sip from a tall gourd of herbal tea known as mate - a traditional drink in southern Brazil, Uruguay and Argentina.

"We have to produce in a more balanced way without affecting the environment, without repeating the mistakes of the past."

Life on the land is not easy, with unseasonal weather and fluctuating commodity prices among the many challenges.

But upgrades to the BR163 and BR230 highways have been positive in an area where heavy rains can cut people off from towns and animal markets during the wet season from November to June.

With their three children already grown up, the gregarious Dos Santos teaches his grandson Pedro Henrik how to look after the cattle. He hopes the 13-year-old will take over the ranch one day.

"We learned to like cattle," says Dos Santos, wearing a broad-brimmed hat, after herding a group of Brahman cattle into a wooden corral.

"You have to like what you do. My passion is seeing the animals healthy," adds the rancher, who is also the local agriculture secretary.

The couple are proud of their efforts to preserve the rainforest still left on their ranch.

Trees behind their house attract native birds and help lower the indoor temperature during the hottest months.

It is also a source of income. Maria, industrious and unconcerned about snakes or scorpions as she walks around in flip flops, sells organic fertilizer, which she collects from the forest floor.

She also harvests bananas from a small plantation, which she cuts down with a sharp blade as hens and chickens scratch and peck in the dirt.

She always leaves behind a few bunches for the birds to feed on.

"But they are destroying everything." 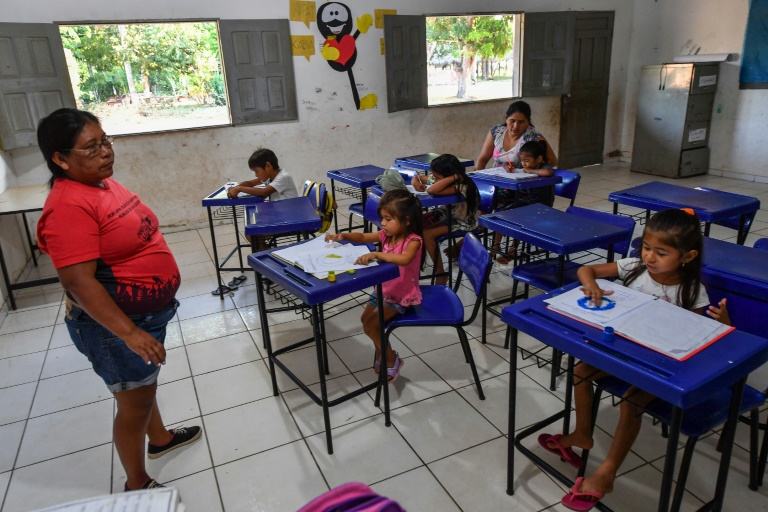 Indigenous teacher Claudeth Gabriel Sau Munduruku, who works at school in the Praia do Mangue indigenous reserve, isn't sure there will even be a rainforest in the Amazon when her students are grown up.

Will the Amazon rainforest still exist when they grow up?

"We only see destruction," the 44-year-old says as she takes a break from teaching young members of the Munduruku tribal community in Itaituba.

"I don't know if this generation of children... will still have the forest. In 10 years from now, what will happen?"

Half a dozen students begin arriving in the classroom at 7:30 am.

They slip off their flip flops and take their seats at blue plastic desks, as pet dogs flop on the ground outside, waiting for the school day to finish.

Above the whirring sound of ceiling fans, Sau - wearing denim shorts and a red T-shirt - begins teaching mathematics. On other days, she focuses on geography, science or Portuguese.

But the afternoons are always dedicated to the basics of the Munduruku language.

Progress in the mother tongue is slow - if there is any at all.

Sau says most of the children get no help from their parents, whose can barely speak Munduruku - their first language is Portuguese.

Once the children leave the indigenous school and enter the mainstream education system in Itaituba, Sau's chance to teach them Munduruku is gone.

"They are bullied and I think because of that, they feel embarrassed" to be indigenous and speak their language in front of others, she says.

Sau, who has been a teacher for 17 years, says the children need to learn Munduruku to strengthen their sense of identity.

"I started teaching by necessity, but afterwards, I embraced the education cause," she says.

"The parents need to be helping us. To learn Munduruku, the children need to practice at home."

Preserving the Munduruku language is only one of the challenges facing Sau and other tribal leaders as they try to stem negative influences from town.

Drugs, alcohol and prostitution have seeped into the indigenous community, located at the end of a residential street.

Around 50 families live in simple wood or brick houses on 30 hectares bordering the Tapajos River.

As midday approaches, the students stop for a lunch of chicken, salad and a manioc flour mixture prepared by Sau and her assistant.

For some of the children, it is their first meal of the day. 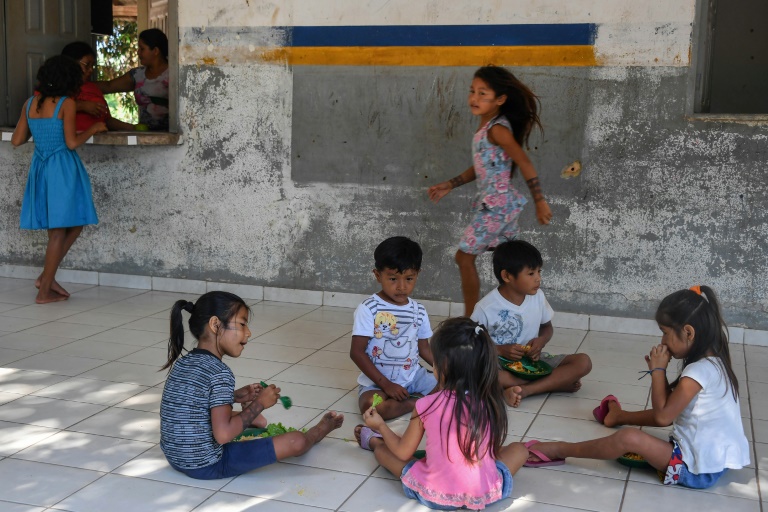 Students have lunch during a break at school in the Praia do Mangue indigenous reserve where Claudeth Gabriel Sau Munduruku works.

"Sometimes you see a child here and they say they haven't had breakfast because there wasn't any," says Sau, who is not much taller than some of her students.

The school is lacking in basic resources. There is no photocopier so the teacher writes out lessons by hand.

"Children need to play, they must have games (to learn), but here we don't have any. We need paint, we don't have colored pencils.

"I've asked the parents, but they haven't provided any." 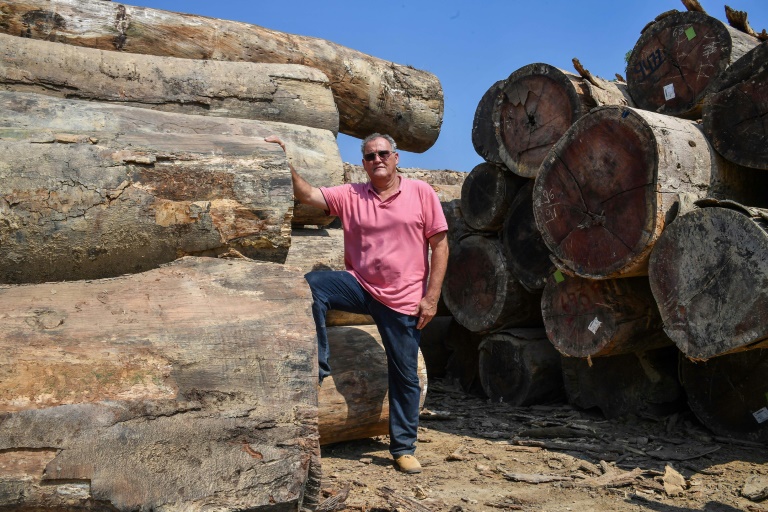 Licensed logger Rubens Zilio, seen here at his Serra Mansa sawmill, complains that many critics of illegal Amazon logging are still reluctant to pay the higher cost from his sustainable, legal operation.

Rubens Zilio is proud to be a "100 percent legal" logger in the Amazon. But it irks him that some of the loudest critics of Brazil's environmental policies are reluctant to pay extra for his wood.

"Not all clients agree to pay more to certified producers," says the 56-year-old Zilio as he takes AFP on a tour of his sawmill in Moraes Almeida.

Inside the mill, dozens of men and women wearing protective gloves, glasses and headphones operate noisy cutting machines that slice through the timber like butter, turning it into smaller pieces for pool decking or house construction in the United States, Europe and Asia.

"They talk a lot about wanting to preserve the Amazon, but when it comes to buying product from the Amazon, they want the cheapest," Zilio says bitterly.

"France is the main one."

Rubens's company Serra Mansa was started by his father-in-law in the central-west state of Mato Grosso. The family moved further up the BR163 highway to Moraes Almeida more than 20 years ago.

For many years, Zilio says he worked on the "margins of illegality," striking agreements to extract wood from small landowners.

It got "more complicated" after US missionary and rainforest defender Dorothy Stang was murdered in 2005, sparking a crackdown on illegal activities in the rainforest.

Zilio, his arms tanned from working outdoors, turned to wildcat mining to support his wife and three children.

But in 2016, the federal government awarded Serra Mansa and four other sawmill operators a 40-year concession to log in more than 200,000 hectares of rainforest.

The concession is divided into sections. Before Zilio's team of chainsaw-wielding loggers gets to work, the details of each tree and its location are entered into a database.

That enables buyers to trace their purchase back to its origin.

The process is monitored by government agencies to ensure Zilio does not exceed his annual extraction limit.

After logging a section of the concession, Zilio must leave it for 30 years so it can recover.

"There is a lot of heat and humidity in the Amazon. The vegetation grows a lot," he says.

The concession has been good for business because customers know the wood is legit, he says.

Zilio bridles at foreign criticism of Brazil's management of the Amazon, especially from the G7 countries, which he says want to take "our riches."

"The Amazon is ours," he says emphatically, echoing President Jair Bolsonaro's sentiments.

In Zilio's opinion, only 50 percent of forest should be preserved.

The rest should be opened up to logging and mining concessions or farming and cattle breeding - with clear landholding titles and heavy penalties applied to those who deforest too much.

Zilio admits there are "bad loggers" in the Amazon, but he says the vast majority want to do the right thing and log sustainably.

"The logger wants the forest standing to guarantee the future of his children and grandchildren," he says.

"In the concession, there has not been a single fire in four years... because we are the guardians of the Amazon."

11 %
No: That is going too far. I do not want all my movements monitored.