German diners have been finding novel ways to socialise in a time of severe restrictions.

INTERNATIONAL NEWS - Businesses closed across Ireland on Thursday for a second national coronavirus lockdown, as record infection surges in Germany and Italy helped to spread gloom across the continent.

Most European governments have been reluctant to reimpose national stay-at-home orders, after previous restrictions led to deep recessions and widespread bitterness.

But Ireland's five million people have been ordered to stay at home for six weeks, with non-essential businesses told to shut up shop, among other rules.

"It's devastating to see us locked down again... during our busiest line-up for the Christmas period," Dublin antique jeweller John Farrington told AFP this week.

Germany and Italy are both facing record surges, registering their highest one-day tallies since the pandemic began. 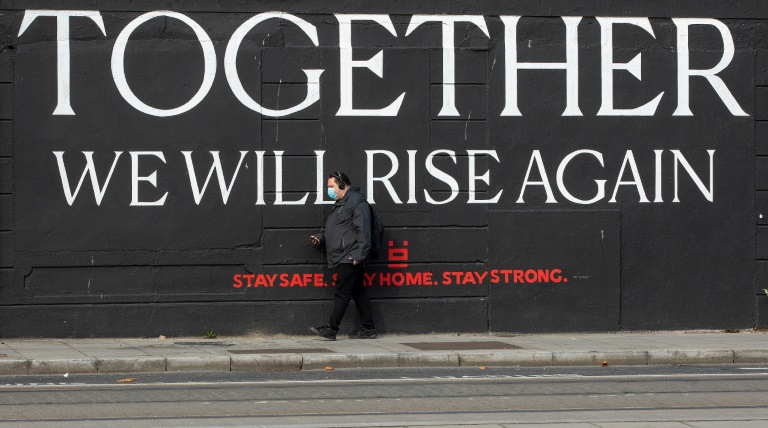 Ireland's five million people have been ordered to stay at home for six weeks, with non-essential businesses told to shut up shop, among other rules.

While German health experts said it was still possible to combat the outbreak by observing recently-toughened rules on distancing and gatherings, Italy ordered curfews in regions that cover the capital Rome and business hub Milan.

As Europe suffers, China - where the virus first emerged at the end of last year - continues to make strides back to normality, announcing it would allow 10,000 fans to watch the final of its Super League football competition.

"It'd be that kind of ceiling because it's a big game for sure," Chinese Football Association secretary-general Liu Yi told AFP.

The virus has killed more than 1.1 million people and prompted a catastrophic economic downturn - the International Monetary Fund predicting a 4.4 percent drop in global output for 2020.

Germany, along with most European countries, has already banned large gatherings and made face masks compulsory in certain areas. 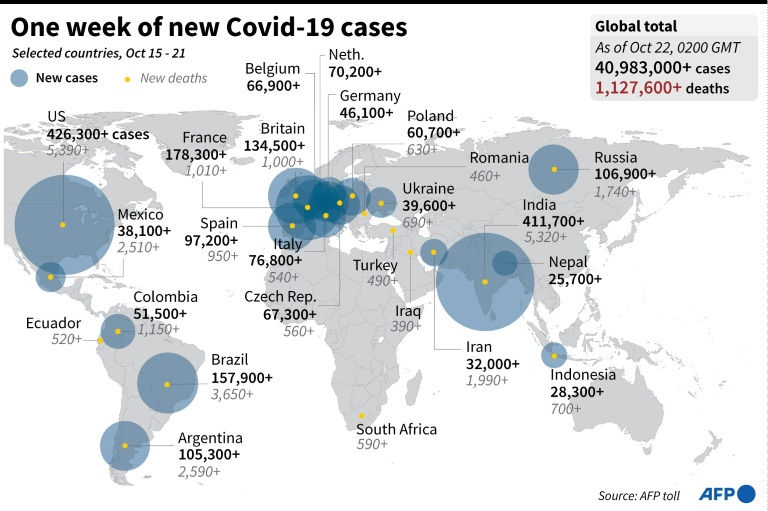 One week of new Covid-19 cases

"The overall situation has become very serious," said Lothar Wieler, head of the Robert Koch Institute disease control centre, adding that it was still possible to bring the virus under control through "systematic compliance with restrictive measures".

In a symbol of Germany's woes, Health Minister Jens Spahn - widely praised for his calm stewardship during the pandemic - tested positive and went into home isolation.

In Belgium, which has one of the worst records of virus infections per person, Foreign Minister Sophie Wilmes is being treated in intensive care after testing positive.

"She is conscious and she can communicate," her spokeswoman said.

As stories of individual suffering emerge from the latest upsurge of cases in Europe, the grim statistics are also stacking up - Spain becoming the sixth country to have registered more than one million infections. 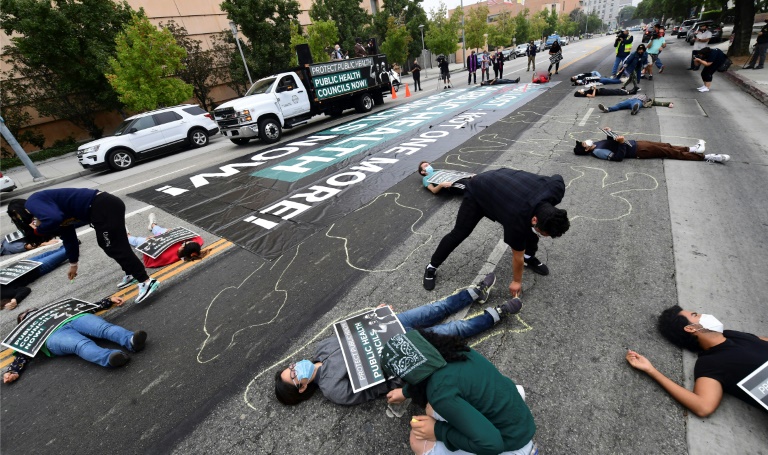 Essential workers, members of the clergy, parents and activists participate in a 'die-in' and memorial service to honor those who have died of Covid-19 in Los Angeles.

And in Britain local lockdowns were coming into force even as a bitter political row over the measures remained unresolved.

More than seven million people will face severe restrictions by the weekend, prompting opposition leader Keir Starmer - who wants a national "circuit break" lockdown - to warn of "months of agony" ahead.

The scramble to develop a vaccine, involving dozens of clinical trials across the world, also failed to lift the gloom, with the first death reported of a volunteer. 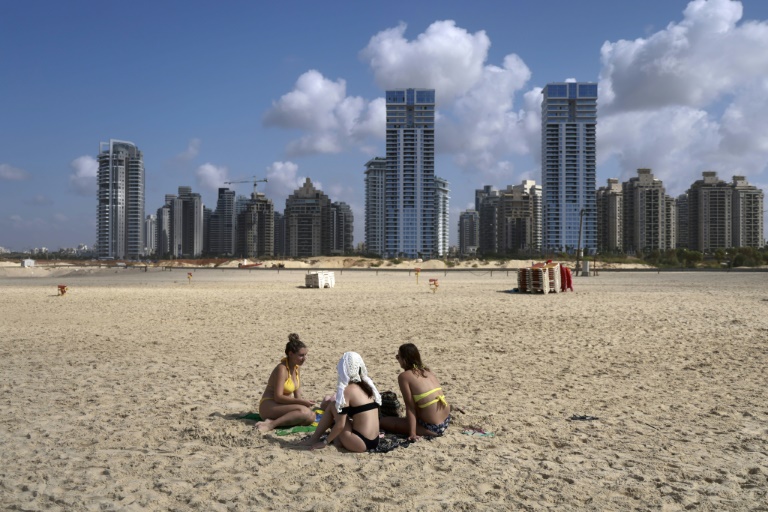 In Israel, people were enjoying their freedom after the government raised the second lockdown.

It was not clear if the volunteer, taking part in trials in Brazil of a vaccine developed by Oxford University, had received the vaccine or a placebo.

The university said in a statement there were no concerns about the safety of the trial and Brazilian regulators had recommended that it should continue.

However, a leading public health expert sought to dampen expectations of a silver bullet emerging from any of the clinical trials.

Peter Doshi of the University of Maryland School of Pharmacy said none of the trials would prove whether a product could prevent people contracting Covid-19 and none were evaluating the drugs for their efficacy in vulnerable groups such as older people.

"None of the trials currently under way are designed to detect a reduction in any serious outcome such as hospital admissions, use of intensive care, or deaths," Doshi wrote in the BMJ medical journal on Thursday.

"Nor are the vaccines being studied to determine whether they can interrupt transmission of the virus."