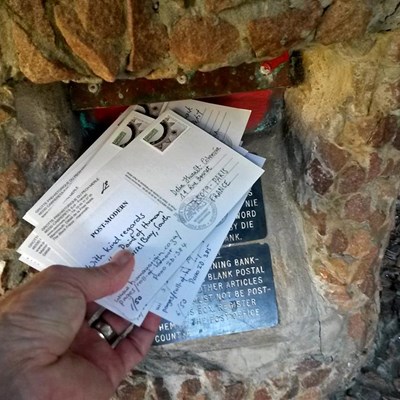 Postcards from Pech Merle in France are posted at Mossel Bay's Post Office Tree to connect Europe and Africa though the story of modern human origins.
MOSSEL BAY NEWS - South African born artist Laura Emsley is using postcards to connect the people of Europe with their African origins via her 'Modern Minds' exhibition, which was developed during a three-month-long residency at La Maison des arts Georges Pompidou.

It's been on show in the French town of St Cirq Lapopie since 6 July, and is also a feature of the Lot Valley region's Contemporary Art Festival.
St Cirq Lapopie is situated close to the famous Pech Merle Cave, which is decorated with rock art that dates from the Gravettian culture (which thrived more than 25 000 years ago), and possibly from the later Magdalenian era (18 000 years ago).

The seven chambers of the cave sport lifelike images of woolly mammoths, horses, reindeer and humans, as well as many abstract symbols. The system is one of only a few French rock art sites that are open to the public. Mossel Bay's Pinnacle Point Caves, on the other hand, have revealed the earliest evidence for modern human behaviour - dating to 162 000 years ago.

This includes the systematic harvesting of seafood, the earliest complex technology (in which tiny, precisely made stone bladelets were embedded in wood or bone to create more efficient tools), and the earliest use of fire to anneal a raw material (silcrete), and so create a superior product from which tools were made.

With more than 40 scientists from around the world, and massive grants from the USA's National Science Foundation and the Hyde Family Trust, the South African Coastal Palaeoclimate, Palaeoenvironment, Palaeoecology, and Palaeoanthropology (SACP4) Project is led by Curtis Marean, an associate director of the Institute of Human Origins and professor at the School of Human Evolution and Social Change at Arizona State University. It is the largest scientific project of its kind in the world today.

"In Europe, the common belief still seems to prevail that the modern mind with its ability to create symbolic form appeared there, out of nowhere, during the Upper Palaeolithic (or Late Stone Age)," said Ms Emsley.

"The significance of the finds in South Africa does not seem to have penetrated the European public's consciousness. The aim of this project is to disrupt this Eurocentric version and create a greater awareness of (humankind's) links to South Africa."

For her exhibition, Ms Emsley made videos in both Pech Merle and Cave 13B at Mossel Bay's Pinnacle Point, which is the focus of the SACP4 Project - an interdisciplinary study of the Middle Stone Age archaeology and other aspects of various caves in the Southern Cape.

She said that her project links the abstract markings seen on the walls of various European caves to markings on artefacts like those on the famous engraved ochre block that was found at Blombos Cave in the Western Cape - and which accord with theories advanced by David Lewis-Williams in his seminal book Mind in the cave.

According to Dr Peter Nilssen, a consulting archaeologist who brought the Pinnacle Point Caves to the attention of the scientific community at the end of the 90s (when he and his colleague, Jonathan Kaplan, discovered the finds), Ms Emsley has focused her project on the use of the word 'modern.'

"She looks at how the word defines ourselves and our concept of time, and how relics and art of the archaeological record connect our minds across the space that separates Europe from South Africa.

"In order to physically and symbolically make the connection between Pech Merle and Mossel Bay - and between Africa and Europe - Laura has created a limited edition of 50 works by adapting one of the postcards from Pech Merle, with a painting of a mammoth on the front, and the label 'Post-modern' on the back.

"These are available at five Euros each, and the proceeds go to the trust that sees to the conservation of the Pinnacle Point Caves.

"Laura gets the buyers in France to address the cards to themselves, and to put them into envelopes which she posts to us in Mossel Bay.

"When we get them, we write a short greeting from the Point of Human Origins on each one, and stamp and post them back to their owners via the postbox at the historic Post Office Tree in the Bartolomeu Dias Museum Complex - complete with a special commemorative frank from the world's South Africa's oldest post office," said Dr Nilssen.

"The participants' contribution to the preservation of the Pinnacle Point Caves is acknowledged through a listing on the Roll of Honour on Mossel Bay's Point of Human Origins website - and the circle linking humanity across the planet is completed," he said.

Mossel Bay Tourism's Marcia Holm said, "Besides bringing attention to the scientific discovery of the origins of modern human behaviour, Ms Emsley's exhibition and post card campaign has provided our region with invaluable exposure - and we're extremely grateful for that."