Mayor calls for a united front 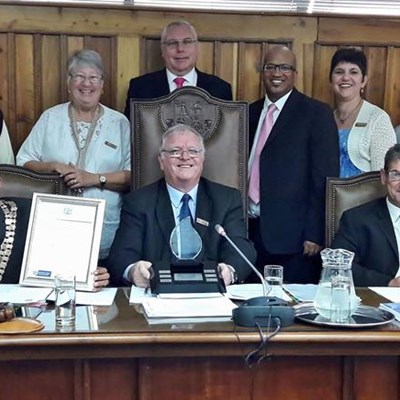 The executive mayor, Alderman Harry Levendal, congratulated the executive councillor for finance, Marie de Klerk, chief financial officer Marius Botha, the respective directors and every single employee who made the fifth consecutive clean audit possible. Photo: Nickey le Roux
MOSSEL BAY NEWS - At the Mossel Bay monthly municipal council meeting the executive mayor, Alderman Harry Levendal, thanked all of the councillors for the huge role they play collectively in the successes the municipality achieves with service delivery.
He made special mention of the awards bestowed on council for the municipality's fifth consecutive clean audit.
Service excellence
Mayor Levendal also thanked every member of staff for doing much more than what was expected from them, even at times after hours and without extra remuneration, to serve the Mossel Bay community and to ensure service excellence.However, he urged councillors to form a united front when dealing with the public, and to always take into account that they represent the collective municipal council of Mossel Bay.
"I am calling for an end to individuals disrupting communities and council processes."
He said: "We as a council and individual councillors must stand united in ensuring the best possible services, environment, health and safety for the whole community we serve. It is important that all councillors support resolutions made by this council. Once council approves a strategy, policy or plan, that plan or policy becomes the responsibility of every single councillor of Mossel Bay.
Code of conduct
"Our code of conduct requires every councillor to 'at all times act in the best interest of the municipality and in such a way that the credibility and integrity of the municipality is not compromised'. This is a clear instruction that no councillor may act contrary to a resolution by council.
"Councillors, when engaging with communities and people, must always support the resolutions, approved policies and plans of the municipality. We need to be seen as one unit leading our people to a better life for them and their children. We must never fight political battles at the cost of the people we serve. The wellbeing of our people must always be the priority, not that of the political party we represent in council."

Do you think etiquette and being polished are still important today?

100 %
NO: The world has changed. There are more pressing issues at hand these days.