Rumour and speculation have followed the sudden closure of the Ford dealership in Mossel Bay.

MOSSEL BAY NEWS - Rumour and speculation have followed the sudden closure of the Ford dealership on Monday, 6 May, in Mossel Bay.

About 25 staff are employed there and some people believe they may lose their jobs.

The dealership was to be bought by Mossel Bay Volkswagen dealership owner Gideon Knoetze.

However, the sale has been delayed or called off. Various rumours are circulating as to the reason for this.

Knoetze declined to speak to the press.

Volkswagen in Mossel Bay has won national accolades and its current new car sales manager, Jaco van der Merwe, has won awards for being the best VW car salesman in the country.

Shortly before the closure of the Ford branch, which faces Louis Fourie Road in Voorbaai, the vehicles there were being loaded up, "to be sold", a source told the Mossel Bay Advertiser.

A rumour has circulated that the Ford dealership had been bankrupt. A note, printed on A4-size paper and stuck on the inside of the front door of the services section of the Ford branch, reads simply:
"All Clients
"Ford Mossel Bay will be closed until further notice." 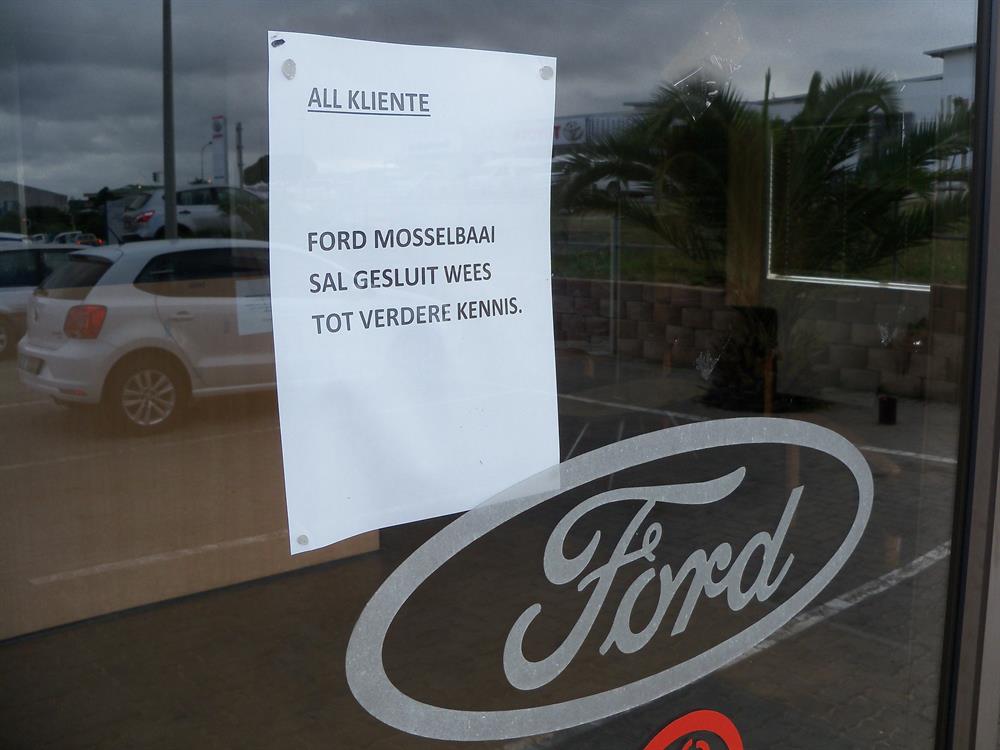 A note stuck on the inside of the front door  reads simply: "All Clients,
Ford Mossel Bay will be closed until further notice."

Several calls
The Mossel Bay Advertiser made several calls to the Ford dealer principal but they were not answered.

After several calls to Ford head office in Pretoria and questions placed to spokespeople there, Ford issued the following press statement to the Mossel Bay Advertiser:

"We regret the inconvenience this is causing our customers and are working on a solution that will see a Ford dealership operating in Mossel Bay in the near future.

"We are committed to ensuring our customers continue to be looked after and if any customer requires assistance we request they contact our Ford Customer Relationship Centre on 086 001 1022 or fordcrc2@ford.com."

A person was still manning the Ford dealership switchboard this week, but she was not on the Ford staff and was an outsider, simply being paid to answer the phone, a source said. She gave the cellphone number of the dealer principal to the Mossel Bay Advertiser.

All Ford staff were "sitting at home", an informed source told the Mossel Bay Advertiser.

Some said the staff were looking for other work, because they were uncertain they would retain their jobs. "I feel sorry for those people, because they're out of work." Another informed source said: "I am sure the dealership will be sold and open up again, but no one seems to know when."