At least 13 black bags filled with dagga were confiscated in George transported in an Avanza and a Ford bakkie.

GARDEN ROUTE NEWS - A high-speed chase between alleged drug dealers and the police through the streets of Conville in George came to an abrupt end when one of the suspects lost control of his vehicle and crashed into a fence.

The two men, aged 33 and 41, driving a Toyota Avanza and a Ford Ranger bakkie, arrived in George from the Eastern Cape when they were arrested by the Hawks and members of the Conville Police on Thursday 30 April.

Dagga with a street value of R700 000, as well as the two vehicles, were confiscated. The two men made their first appearance in the Thembalethu Magistrate's Court on Monday 4 May. At the time of going to print no further details about their court appearance were available.

Southern Cape police spokesperson, Captain Malcolm Pojie, lauded the collaborative efforts that led to the arrests. "Continued efforts by our members in the Western Cape to eradicate drug trafficking into the province once again yielded positive results. This intelligence-led operation by the Hawks, supported by Conville Police, ensured that the two suspects from Thembalethu were successfully arrested," he said.

He said that members of the Conville Police crime prevention unit were strategically deployed after the suspects avoided detection by using secondary routes to enter the Western Cape.

"The Hawks were in pursuit of the suspicious vehicles when they notified us that the vehicles were en route to George. Conville Police tried to stop the suspects when they entered Le Vallia, but they sped off in the direction of Conville. Police officers were in hot pursuit when the driver of the Avanza lost control and collided with a fence of a residence in Conville," said Pojie.

Both vehicles were forced to a halt and both drivers were arrested on the spot.

Knysna Plett Herald reports that Plettenberg Bay and Knysna police prevented more than R650 000 worth of cannabis hitting the Southern Cape streets after two arrests were made in separate incidents on 23 April.

Police officers stopped a white Toyota Hilux on the N2 and asked the driver to produce identification. When the man could not produce the documentation, he was escorted to the Plettenberg Bay police station to verify his credentials. On arrival police also thoroughly searched the vehicle and discovered large quantities of compressed cannabis stashed under fresh vegetables. Police confiscated 109 parcels of cannabis and arrested the 35-year-old driver for dealing in drugs.

On the same day, Knysna police arrested a 25-year-old suspect on the N2 near Sedgefield after he was found in the possession of cannabis. "Vigilant members attached to the Knysna visible policing unit conducted routine vehicle checks when they stopped a Nissan NP200 bakkie," said Spies. "Upon searching the vehicle they found a backpack with two parcels and a plastic bag containing dagga." 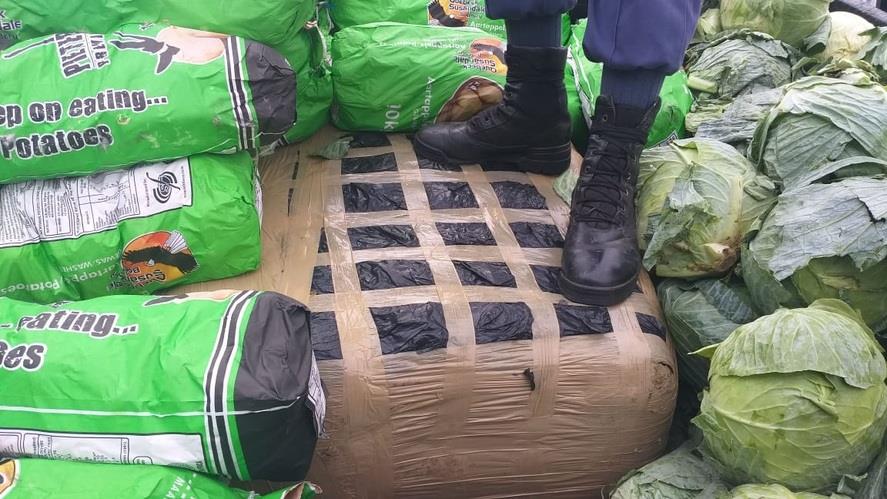 Cannabis hidden beneath fresh vegetables, was confiscated just outside Plettenberg Bay on 23 April.