Karlien van Jaarsveld has been posting on social media, inspiring South African citizens to look after one another.

ENTERTAINMENT NEWS - Singer Karlien van Jaarsveld’s latest Instagram posts not only show that she is human, but also poses as a challenge for humanity, specifically South Africans in the current climate.

Vvan Jaarsveld says she is always hiding the tears behind her sunglasses when she stops at the traffic light and like many, she also doesn’t always have something to give to the stranger on the street corner.

There is not always time to turn back to McDonalds to replace a happy meal for one of her “spoiled children,” she says.

In a series of relatable posts, the singer says that she recently drove down Garsfontein Road in Pretoria, enraged about a woman sitting on the street corner with her baby. 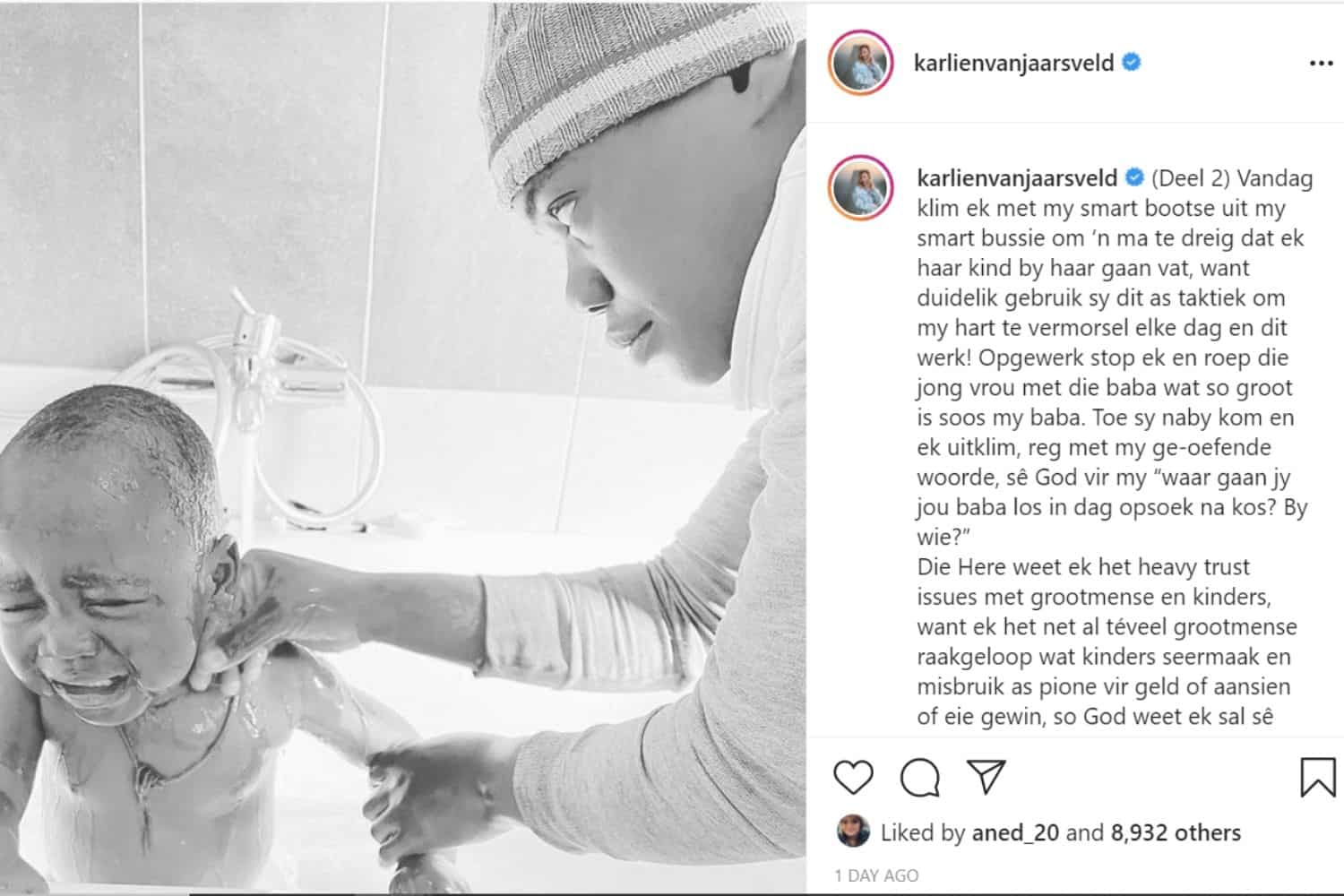 “Today I got out of my smart vehicle with my smart boots to threaten a mom; to tell her I am going to take her child away from her because she is using it as a tactic to crush my heart every day and it’s working! Worked up, I stopped and called the young woman with the baby that is as old as my baby. As she came closer and I got out, God asked me: ‘Where are you going to leave your baby during the day when you’re looking for food? With whom?’”

Karlien says that after the realisation that the woman can’t leave her child anywhere, she had an immediate change of heart and the words just streamed out of her: “Hi, can I take you home? You look hungry.”

Karlien van Jaarsveld took the woman and her son to her house, where they bathed the boy and gave him some of Karlien’s son’s clothes. With the help of her domestic worker, Karlien prepared a meal for the mother and child and filled a few bags with food that they had in the house.

It was only after dinner that the woman smiled for the first time. Karlien van Jaarsveld says that even though the language barrier made communication difficult, she realised that offering help doesn’t need language. She says that helping others has changed the language of her heart.

After a bath and a dinner, Karlien asked the woman where she wants to go, and she replied: “Plasticview.”

Van Jaarsveld says: “We didn’t need many words. I dropped her off with the bags of food at a place that looked like it had been looted. That is the conditions in which they have been living all their lives, that’s what she and her baby are familiar with.”

Karlien van Jaarsveld says that she is making it a tradition now that Every week she will be picking up this little family that she now calls her other family, “for a bath, a meal and a bit of play.”

She says she now wonders what the world would look like if everyone of us looked after someone. “Perhaps there will be less people on the street… Perhaps I will know that I have more than what I need, even if it is just the clothes I’m wearing and food for my children for the day. Perhaps it will then be enough for me to be able to laugh about tomorrow.”