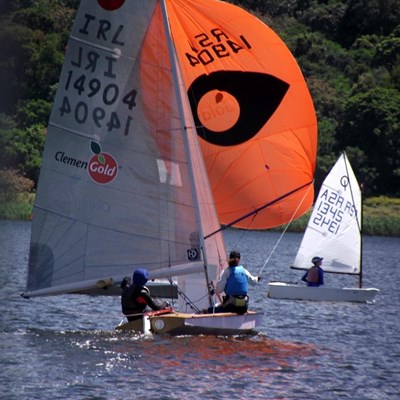 The team of Anthony and Diane Parker, seen here on their Fireball crossing behind the junior fleet winner James Vonk, finished in sixth place overall, despite not being able to sail on the first day.
SOUTHERN CAPE NEWS - George Lakes Yacht Club (GLYC) hosted it annual interclub regatta at its Island Lake venue on the weekend of October 22.
It was attended by competitors from Mossel Bay Yacht & Boat Club and Knysna Yacht Club. One competitor came from further away – Frans and Jamie Loots of Redhouse YC came to the event from Cape St Francis with their Sonnet.
Two fleets were created – a fast fleet (those with ratings less than 1 200) and a slow fleet (those with ratings greater than 1 200). The fast fleet had 20 boats, comprising Fireballs, Lasers, Dabchicks and a Sonnet, Mosquito and Hobie 14. The slow fleet had 24 boats comprising Optimists, Teras, Picos, Toppers, Qbas, Gypsy and Topaz.
Also at the event was the RSA Olympic sailor Asenathi Jim, there to provide coaching to GLYC’s James Hellstrom, who has been selected to the World Sailing Youth World Championships being held in New Zealand at the end of the year.
Saturday was a grey day – cool and overcast with little wind. A patchy, shifty breeze came from the southwest. Two races were held in these conditions. On Sunday morning, the weather was brighter, but the breeze was still lacking.
It started to fill in from the south and two races were held, before a short lunch break was called. Then the wind shifted to the southeast as forecast and strengthened. Two final races were held in ideal sailing conditions.
In the light condition, the potentially fast boats did not perform well, particularly the catamarans. Also the Fireballs could not extend a lead over the rest of the fleet as much as they would have liked. Doing best in the series was KYC’s Dudley Isaac on his Finn. Always up front with the Fireballs, he was the winner of all the races on handicap except the final one, where he got second place.
Doing the best of the three Fireballs sailing was the team of Georgou Divaris and Ferdinand Holm, consistently up front to get second place overall. Malcolm Osborne was the leader among the Lasers, to get third place overall. His main competition from Lasers came from Mossel Bay’s James Marais, fourth overall.
In the other fleet, up front on the water were the Tera Pros of Abigail Sweeney of Mossel Bay and Devaundrey Slinger of Knysna. However, these two could not get far enough ahead of the Optimists to be able to convert this lead into a lead on corrected times. Consistently ahead on this basis was the Optimist of GLYC’s James Vonk, who got first place overall. Second place went to Sean Vonk, who was able to take a couple of race wins off his brother.
In third place was Eurios Horne, ahead of Conrad Holm. Sweeney was first of the Tera Pros – she also got a prize as first girl in this fleet.
The other part of the competition was the interclub aspect. Here, scored on the top three positions in the senior fleet, the winner was George Lakes Yacht Club. Similarly, in the junior fleet, scored on the top five boats per club, the winner was also George Lakes Yacht Club, with a narrow margin ahead of the Mossel Bay boats in this fleet.
George Lakes Yacht Club wishes to extend it‘s grateful thanks to its sponsors Raubenheimers Attorneys and Lew Geffen Sotheby's International Realty (George), as well as to the many volunteers who ensured that the event went off smoothly.
'We bring you the latest Garden Route, Klein Karoo, Hessequa news'