The 22-year-old said she hopes to be fit for the clay-court tournament in Madrid, which starts Thursday.

Ashleigh Barty poses with her trophy and prize, a sports car, after winning the final of the WTA tournament in Stuttgart on Sunday.

TENNIS NEWS - World number one Ashleigh Barty earned her third WTA singles title this year by beating Aryna Sabalenka in the final of the clay-court tournament in Stuttgart on Sunday, then became the first champion in 20 years to also win the doubles event.

After winning in Miami and a pre-Australian Open event in Melbourne on hard courts, Barty added the Stuttgart trophy in her first tournament on European clay this season, as the 2019 French Open winner gears up for Roland Garros next month.

A day after her 25th birthday, the Australian rallied from losing the first set to claim a 3-6, 6-0, 6-3 win over Sabalenka, who needed a medical time-out after the second set for an adductor injury.

"Get healthy, get well - you'll be back in no time," Barty told Sabalenka.

It was a great week for the Australian, who also won the doubles final with partner Jennifer Brady.

This is the first time a player has won both the singles and doubles at the tournament since Lindsay Davenport in 2001.

"I feel I have taken my tennis to a new level this week," said Barty.

"I wasn't far off in the first set, there was a tactical shift when I stepped into the court more in the second set.

"I was proud to be able to put balls in difficult places which made her take more risks."

Despite playing the third set with her right leg strapped, Belarusian Sabalenka even broke Barty at 3-1 in the decider, but ultimately failed to add to January's title in Abu Dhabi. 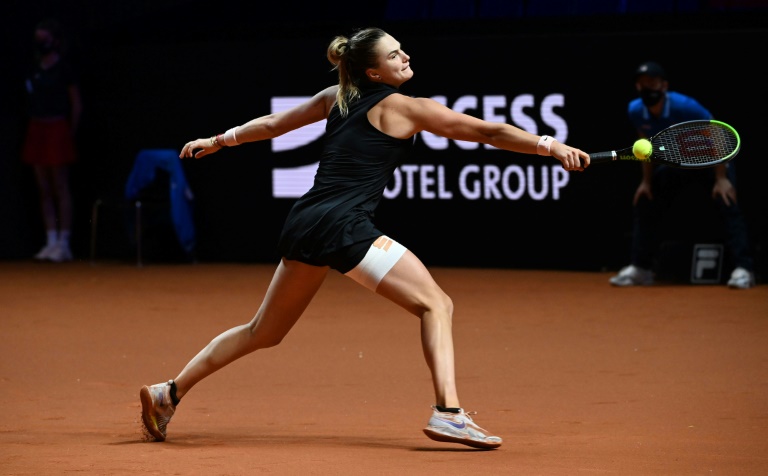 Aryna Sabalenka played the third set of the Stuttgart final on Sunday with her right leg strapped,

The 22-year-old said she hopes to be fit for the clay-court tournament in Madrid, which starts Thursday.

"I gave it my all even with the injury, but she played really well," said Sabalenka, who first felt the injury at the end of the opening set.

"I gave her the opportunity and she took it, she's playing really well on clay, it suits her game.

"I hoped the medical time-out would help me. I am just happy that I was able to play on."