Generators hum loudly in the background as a tour boat bobs past a towering vessel filled with ship fuel, anchored in Algoa Bay, a stone’s throw away from the world’s largest breeding colony of African penguins.

Algoa Bay, off the South African city of Port Elizabeth in the Eastern Cape province, is home to just under half the global population of African penguins. AFP/MARCO LONGARI

Since 2016, mostly cargo ships have pulled in for ship-to-ship (STS) refuelling, allowing them to carry more freight, bypass port fees and save time.

But conservationists, ecotour operators and nature lovers are alarmed about the long-term impact in a marine biodiversity hotspot and major foreign tourist magnet.

They claim the bunkering takes place too close to foraging and breeding grounds, disrupting the ecosystem and exposing sea animals to oil spills.

The risk has been highlighted by the catastrophic oil spill which began earlier this month into a protected marine park off the pristine coastline of Mauritius, after a bulk carrier ran aground on 25 July. 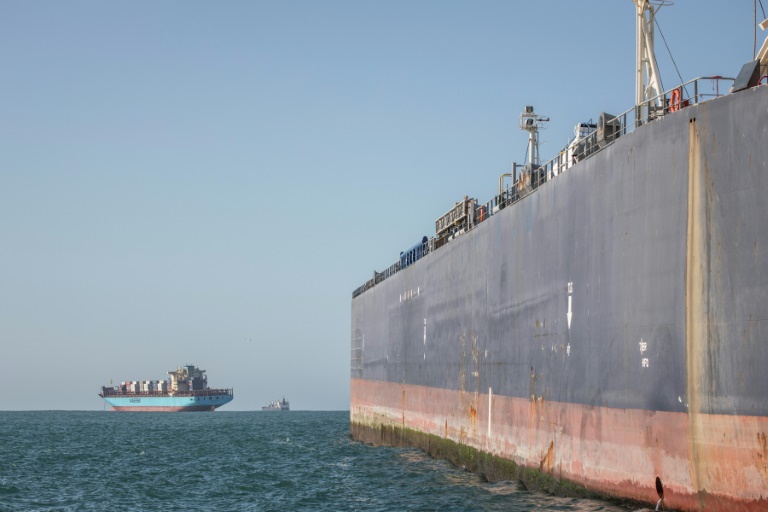 Since 2016, ship-to-ship refuelling, or bunkering, has been possible in Algoa Bay – the main storage tanker can hold 100,000 metric tons of fuel. AFP/MARCO LONGARI

In two minor spills, in 2017 and 2019, rangers rescued dozens of oil-tarred penguins.

Scientists are also studying whether the noise, pollution and increased ship traffic could affect the marine animals.

They are particularly worried that vibrations caused by the activity may drive away those that rely on sonar to hunt fish.

“This is too close to the Marine Protected Area, there are too many risks involved…,” warned environmental scientist Ronelle Friend, of the Algoa Bay Conservation community group, calling for an end to bunkering in the bay.

Algoa Bay – an inlet off the city of Port Elizabeth in the Eastern Cape province – is home to myriad species of seabirds, including just under half the global population of African penguins, classed as endangered by the International Union for Conservation of Nature.

The world’s largest group of bottlenose dolphins was recorded in the bay in 2018, according to a report last year by the Port Elizabeth-based Nelson Mandela University. 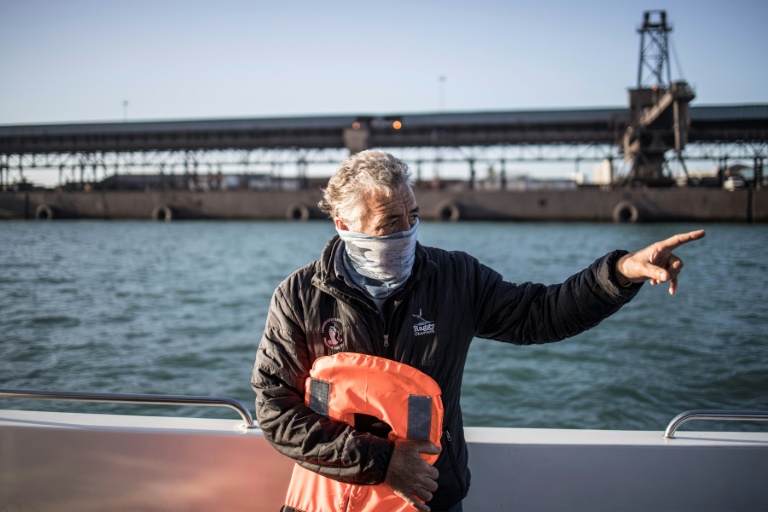 Whale watcher and tour operator Lloyd Edwards says the bunkering hub is “slap-bang in the middle of a hotspot for bait fish that birds feed on”. AFP/MARCO LONGARI

The site is also on the path of an annual sardine run, touted as one of the planet’s most spectacular marine events.

“This (bunkering) operation is slap-bang in the middle of a hotspot for bait fish that birds feed on,” said veteran whale watcher and tour operator Lloyd Edwards, who has run his Raggy Charters marine tours in the area for over two decades.

“People used to be blown away by the amount of animals we had in this bay,” he said, adding he’d noticed that certain whale species were not easy to spot since the STS refuelling started.

“They have all moved away,” he complained, blaming the noise.

Between them, they operate the main storage vessel and up to seven smaller bunker barges, according to Kosta Argyros, the South Africa representative for one of the three, Minerva Bunkering.

Sat on a key trade route, sea traffic has increased as a result of the fuelling hub, conservationists said.

Argyros stressed that bunkering was a “safe operation” in a “very regulated industry”.

When “two vessels are tied together they become like one entity,” he told AFP.

“This is environmentally friendly no matter what the people say.” 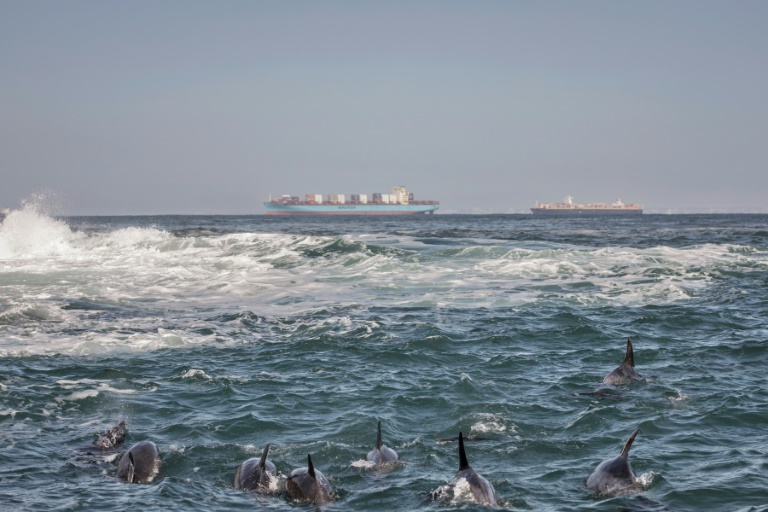 Conservationists have raised the alarm about the long-term impact of bunkering in a marine biodiversity hotspot. AFP/MARCO LONGARI

South African Marine Fuels, which was behind the July 2019 spill, said it “occurred due to an overflowing tank of the receiving vessel” and that between 200 and 400 litres (53 and 106 gallons) of oil fell into the sea.

The company “is highly committed to the safety of its operations and responsibility to people and the environment,” it said in a statement to AFP.

Heron Marine, the third licensed company, said it operated according to all health, safety and environmental regulations.

About 100 oiled penguins were recovered from last year’s spill.

Seabird scientist Lorien Pichegru said that, while damage from the incident had been limited, bunkering posed yet another threat to a species whose global population fell below 40,000 last year.

“The oil on their feathers takes away their waterproofness,” said the Nelson Mandela University researcher, who has been studying African penguins in Algoa Bay since 2007.

Eventually they die of “starvation and cold”, plus oiled adults tend to abandon their eggs and chicks, she added. 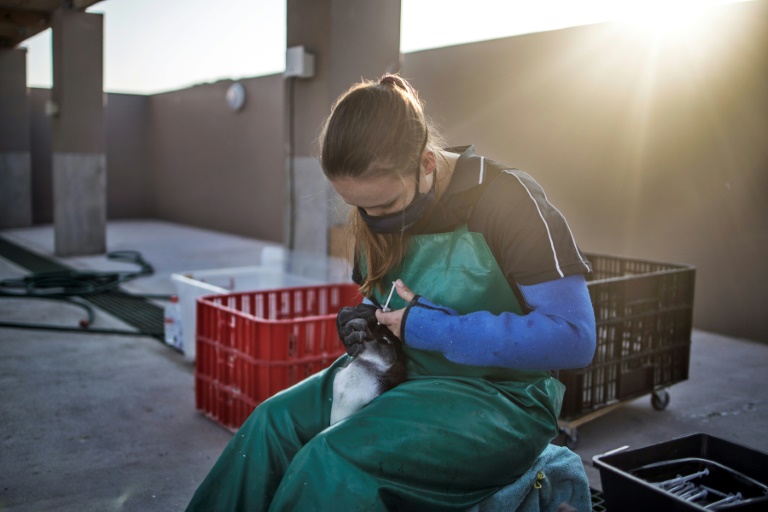 Over three decades, African penguins have fallen in number by more than 60 percent. AFP/MARCO LONGARI

In attempting to clean themselves, the birds also ingest toxins shown to damage their internal organs and breeding capacity.

African penguins, distinct by their bray-like call and black horseshoe marking across their chest, only breed in South Africa and Namibia but are found in Mozambique too.

Over three decades, their numbers have fallen by more than 60 percent due to climate change, oil spills, human activity, overfishing and habitat destruction, experts say.

In Algoa Bay, the population has also fallen sharply — from 10,900 breeding pairs in 2015, to 6,100 in 2019, according to figures from South Africa’s Environmental Affairs department.

“Any additional threat to them might kill the entire species,” Pichegru warned. 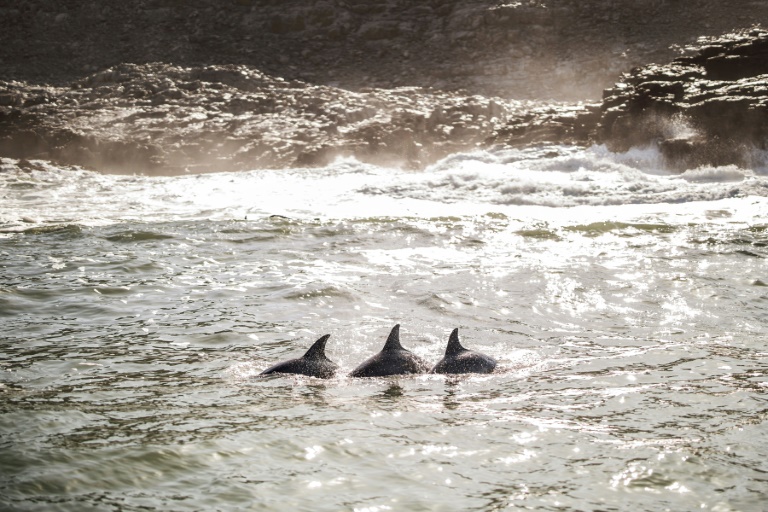 The 2019 university report on the Eastern Cape coastline, centred around the bay, also highlighted that it was a foraging area for seabirds, sharks, cetaceans and turtles, on the migration route for loggerhead and leatherback turtles and home to the world’s largest Cape gannet colony.

However, scientists and conservationists say they have observed changes in animal behaviour which they suspect are a consequence of bunkering activity — even without spillage.

“We think the noise of the engines disrupts the penguins’ and dolphins’ ability to find fish,” said Gary Koekemoer, who heads the Wildlife and Environment Society of South Africa in Algoa Bay.

“Any animal that is using sonar or sound to locate its prey will have difficulty navigating with the vibration from the engines.”

The loss of marine life could be devastating for tourism. 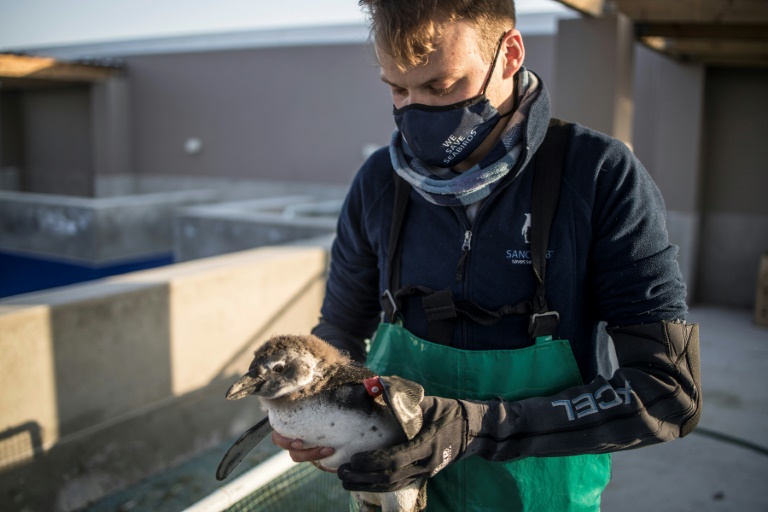 Any loss of marine wildlife could hit tourism too — ocean safaris have been popular in recent years. AFP/MARCO LONGARI

Tourism generates some 40,000 direct and indirect jobs in the area, according to municipal figures.

“Beaches and wildlife are the two big drawcards for visitors and… offshore bunkering is bound to impact both of those,” Shaun Fitzhenry, NMB Tourism board chairman, said.

The South African Maritime Safety Authority (SAMSA), which licensed the bunkering operators, said STS refuelling generated employment but had to be balanced with environmental concerns.

“We need to sustain the protected area, but we need to use the opportunity to develop the economy,” SAMSA acting chief executive Sobantu Tilayi told AFP.

“That is the balance we keep navigating around.”

Since the 2019 spill, bunkering times have been limited, barges carry more oil containment booms and several response boats are on constant standby in case another leak occurs.

But, out at sea, skipper Jake Keeton frowns, concerned at the sight of an unusually small cluster of penguins nesting on the outcrops of a rocky island.

“Penguins push fish together into a bait ball that allows everything else to feed,” he said.

“So if we lose the penguins here, dolphins, seals, gannets, cormorants and all your other seabirds will struggle.”

64 %
No: I don't make a point of self examining or going for mammograms.