The path to staging the Tokyo Olympics has been far from smooth.

The Tokyo Games were originally seen as a chance to rebuild after the 2011 earthquake, tsunami and nuclear disaster.

INTERNATIONAL NEWS - From a historic virus postponement and summer heat fears to unprecedented restrictions on fans, the path to staging the Tokyo Olympics has been far from smooth.

With one month until the opening ceremony on July 23, AFP chronicles Tokyo's troubled journey to the Games.

News presenters shed tears and crowds erupt in delight as the International Olympic Committee names Tokyo host of the 2020 Games.

Thoughts turn to the victims of Japan's devastating 2011 earthquake, tsunami and Fukushima nuclear disaster, with the Olympics seen as a chance to rebuild.

Proposals for a new national stadium go back to the drawing board in July 2015 following public anger over the $2 billion price tag.

As the Games stumble from one problem to another, Kenjiro Sano's original Olympic logo design has to be ditched over its resemblance to the emblem of a Belgian theatre. Sano denies plagiarism.

The following year a new "snake-eye" logo for the Games is unveiled.

French magistrates charge the head of Japan's Olympic committee as they probe payments totalling $2.3 million made before and after Tokyo's nomination.

Tsunekazu Takeda protests his innocence but later steps down from the role.

In October, the IOC shifts the Olympic marathon to northern Sapporo to avoid the capital's sweltering summer heat - a surprise move that infuriates Tokyo officials. 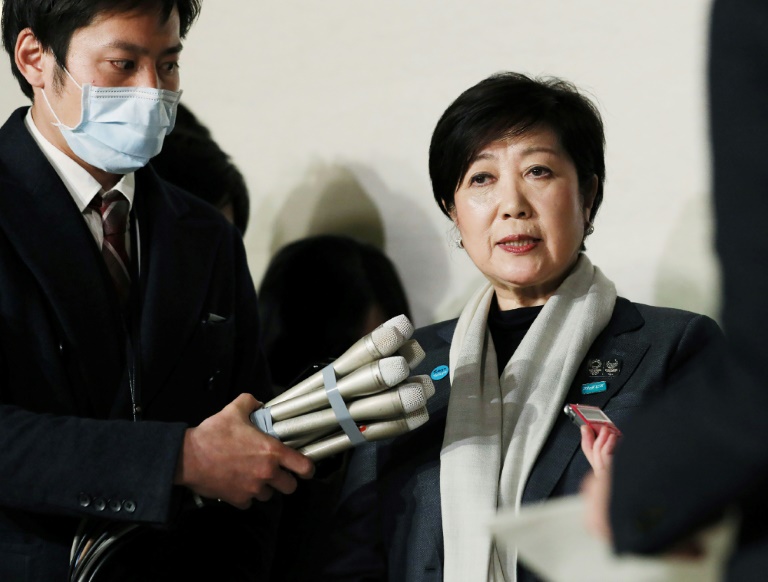 Tokyo Governor Yuriko Koike explains the unprecendented decision to postpone the Olympic Games by a year.

With the coronavirus spreading rapidly worldwide, Japan and the IOC make the historic decision to postpone the Olympics.

Organisers later rule out the possibility of postponing the Games a second time.

Vowing that the rescheduled Olympics will go ahead, organisers outline plans for holding the event safely.

Athletes will facing regular testing and restrictions on mingling, while spectators are banned from cheering.

The IOC says it will try to ensure as many participants as possible are vaccinated, but jabs will not be obligatory. 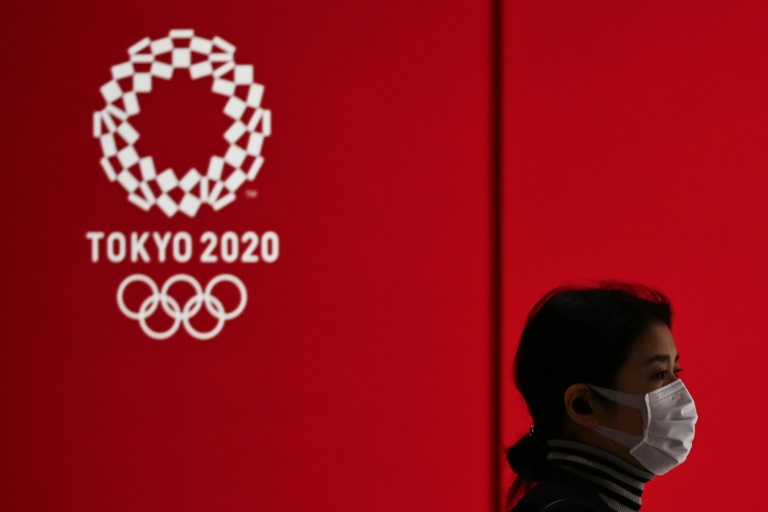 A woman wearing a face mask walks past a display showing the 2020 Olympics logo in Tokyo as support among the Japanese public for staging the Games wanes badly.

Public support for the Olympics plunges in Japan as a virus state of emergency is declared in Tokyo and other regions to halt a winter spike in infections.

But organisers and the IOC insist the Games will be held, with Prime Minister Yoshihide Suga saying they will be "proof of mankind's victory over the virus".

Tokyo 2020 chief Yoshiro Mori resigns after his claims that women talk too much in meetings spark a firestorm of criticism. 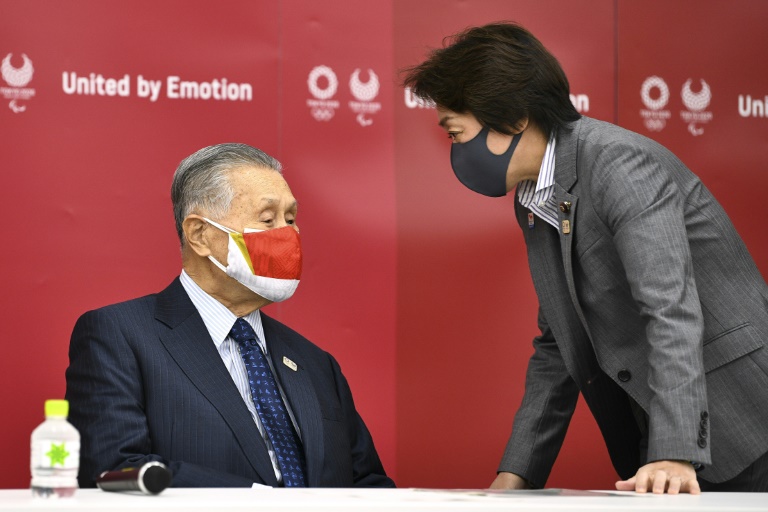 Sexism row: Yoshiro Mori, left, was forced to stand down and to be replaced by Olympics minister Seiko Hashimoto, right.

He is replaced by Olympic Minister Seiko Hashimoto, a seven-time Olympian who is one of just two women in Japan's cabinet.

Just weeks into her tenure, she accepts the resignation of the creative director for the Games' opening and closing ceremonies after a report reveals he suggested a plus-size female comedian could appear as an "Olympig". 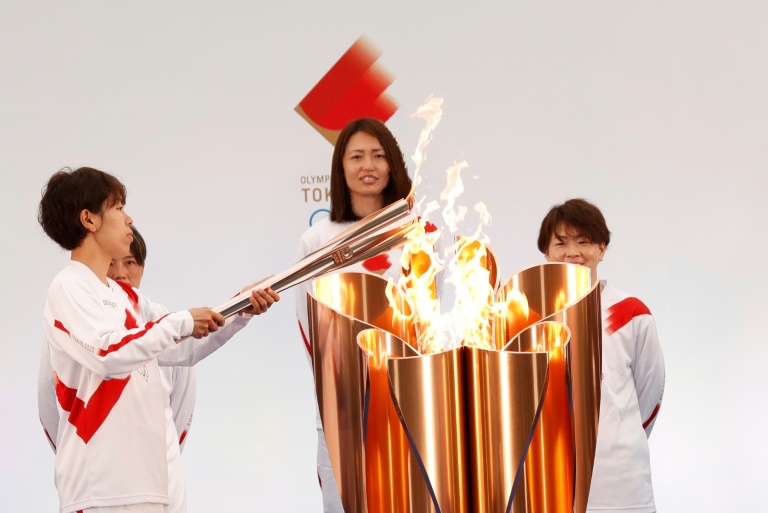 In an Olympic first, overseas fans are barred from the Games to limit infection risks.

On March 25, the cherry blossom-shaped Olympic torch is lit in Fukushima, with no spectators allowed at the launch.

As the flame traverses the country's 47 prefectures, several public sections of the relay are scrapped in areas where virus cases are spiking. 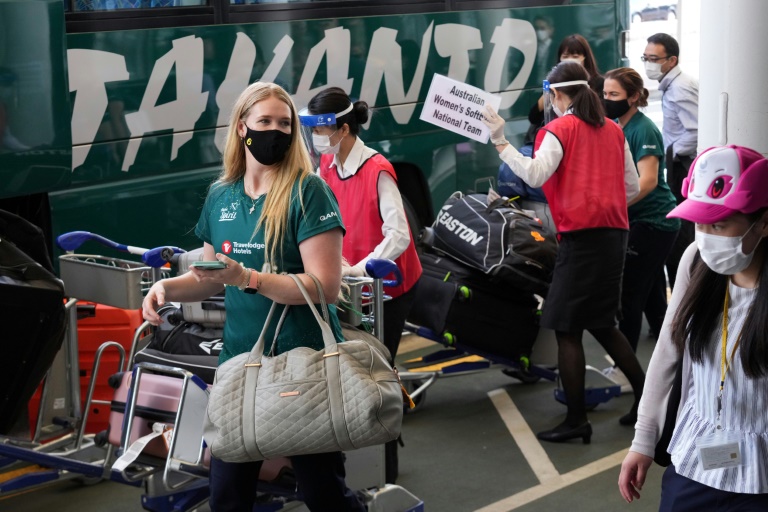 In April, North Korea says it will not attend the Tokyo Games to protect its athletes from Covid-19, dashing Seoul's hopes of using the Games to restart talks with its nuclear-armed neighbour.

Through spring and into summer, debate rages about whether the Olympics should be held as planned, as the pandemic continues to wreak havoc and new variants emerge.

But several test events are held successfully, and in a major step forward for the troubled event, on June 1, the first foreign athletes arrive in Japan - Australia's softball team, who are attending a pre-Games training camp.

Organisers opt to limit fan numbers to half venue capacity per event, capped at 10,000, soothing fears of a Games in front of empty stands. But they warn that events could move behind closed doors if infections spike in Japan.