Struck by the sight of bright red blooms on broken ground, McCrae wrote a poem, “In Flanders Field,” in which he channelled the voice of the fallen soldiers buried under those hardy poppies.

GARDEN ROUTE NEWS - The Outeniqua Shellhole of the MOTH will be commemorating Remembrance Day on Wednesday 11 November, but the number of people at the parade is very limited so it is not open to the public.

In order to create awareness of the MOTH (Memorable Order of Tin Hats), they have supplied an overview of what the MOTH is and of the various branches in the Garden Route.

Remembrance Day, sometimes known informally as Poppy Day owing to the tradition of the remembrance poppy, is a memorial day observed in Commonwealth member states since the end of the First World War to remember the members of their armed forces who have died in the line of duty.

Following a tradition inaugurated by King George V in 1919, the day is also marked by war remembrances in many non-Commonwealth countries. Remembrance Day is observed on 11 November in most countries to recall the end of hostilities of First World War on that date in 1918.

The First World War officially ended with the signing of the Treaty of Versailles on 28 June 1919.

Origin of the Memorable Order of Tin Hats (M.O.T.H)
The Memorable Order of Tin Hats or the MOTH as it is popularly known is an ex-servicemen's organisation founded in Durban, South Africa in May 1927 by a remarkable man Charles Alfred Evended. In 1927 he saw a war film that included an impressive scene of marching troops wearing tin hats, and muddy uniforms all carrying trench equipment.

Looking at the scene, it made him wonder what had become of his comrades in the army; where they were and what they were doing. This line of thought inspired a cartoon on forgetfulness of comradeship that had apparently ceased to exist.

From this one idea other ideas came to the fore, then discussions with colleagues and friends and, eventually, the founding on the 7th May 1927 of an ex-servicemen's organisation known as the Memorable Order of Tin Hats or simply MOTH.

The Order is built on concord and harmony and operates independently of race, religion or politics in the same way as front line service, but with full democracy. 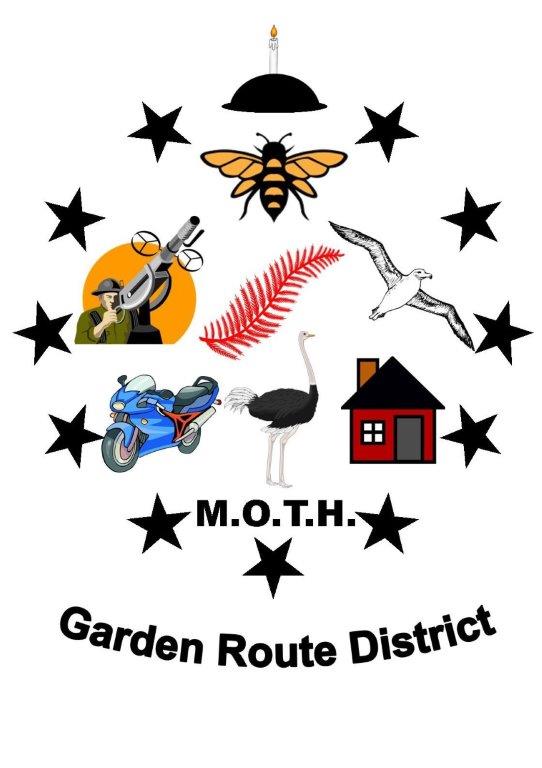 The Order is built on concord and harmony and operates independently of race, religion or politics in the same way as front line service, but with full democracy.

George (Bee)
Outeniqua Shellhole was chartered on the 7th June 1949 under command of the Western Provincial Dugout.

The name of the Shellhole was inspired by the beautiful mountain ranges along the Garden Route, the Outeniqua Mountains.

Taken from Sydney Opperman's articles: "The Outeniqua Mountains near George were named after the ancient indigenious people, the Outeniqua. The name Outeniqua consists of three component words : Ou-teni-qua that describe them as 'people living in harmony with honey bees'. The bee would be the symbol of these people, not only here, but also in the ancient civilisations of India and Egypt. It carries the symbolism not only of 'Mother Earth and her energy', but also of 'divine intelligence'.

Another bearing/translation: Outeniqua is said to be derived from the Outeniqua tribe that once lived in this area and it means : They who bear honey (Honey Bearers).

This Shellhole developed over the past 71 years to the successes it enjoys today and these have been achievable through hard work and commitment by all the members of the Outeniqua Shellhole.

During WW 1 & 2 there was a Gun Battery installation as part of the Coastal Garrison Artillery near the Saint Blaize Lighthouse which protected the harbour and many sightings of German U-boats were reported and shot at from the battery on top of the cliff.

The name was then adopted by the Moth Shellhole. The “Blaize” from St Blaize and “Away” from “fire away” of the gun battery. Many of the Moths were deployed at the gun battery. There is a hand carved brass plaque somewhere in the Shellhole depicting the “Guns of Blaize Away”!

Sedgefield (RedFern)
RedFern was started by a group of Moth from Albatross Shellhole who were resident in Sedgefield & surrounds, is the youngest Shellhole in Garden Route District. RedFern’s charter date is 11 July 2009. It is situated in the Sedgefield Village Green and meet on the last Wednesday of the month.

RedFern hosts parades at the Village/MOTH Memorial in Flamingo Ave.

As explained by late Moth Willy Ward: The reason why “RedFern” was chosen as a name for the Shellhole is that the Red Fern symbolises the Bush Wars in this part of the world.

This route was the transit route to Egypt for the Germans who landed in Libya. Many skirmishes took place between the allied forces who came from South Africa, New Zealand, and Australia who protected the transit route. This is where the name of the Shellhole, Halfaya Pass Shellhole originates from.

The Shellhole uses the emblem of the ostrich on the logo because it is unique to the Oudtshoorn region.

Knysna (Albatros)
The Albetros stands firm in literary history thanks to the Rhyme of the Ancient mariner , there is more to this bird than poetry . He flies with great wisdom ,you cannot connect with his spirit without getting wet, true to the living Ideals of Mothdom.

MOTH Motorcycle Association
The MMA is an association of bikers that belong to the MOTH Order, mostly blokes that served in the Border wars, we are a brotherhood that was formed by veterans who hold old school values in high regard: respect, comradeship, loyalty and honesty.

The Poppy
The Remembrance Day poppy symbol started with a poem written by a World War I brigade surgeon who was struck by the sight of the red flowers growing on a ravaged battlefield.

Struck by the sight of bright red blooms on broken ground, McCrae wrote a poem, “In Flanders Field,” in which he channelled the voice of the fallen soldiers buried under those hardy poppies. Published in Punch magazine in late 1915, the poem would be used at countless memorial ceremonies, and became one of the most famous works of art to emerge from the Great War.

'In Flanders Fields' by John McCrae

In Flanders fields the poppies blow
Between the crosses, row on row,
That mark our place; and in the sky
The larks, still bravely singing, fly
Scarce heard amid the guns below.

We are the Dead. Short days ago
We lived, felt dawn, saw sunset glow,
Loved and were loved, and now we lie
In Flanders fields.

Take up our quarrel with the foe:
To you from failing hands we throw
The torch; be yours to hold it high.
If ye break faith with us who die
We shall not sleep, though poppies grow
In Flanders fields.