A piece of quartzite.

MOSSEL BAY NEWS - If you are new in town, you might be interested in the types of stones one sees in the Mossel Bay area.

The sandstone buildings are an attractive feature and several of the walls in town are notable because they are built from stones of varying colours, such as beige, pink, mauve, orange, yellow, red, grey and brown.

Walking on the beach, smooth, white rounded pebbles, much like marble which a sculptor would use, can be seen.

The Mossel Bay Advertiser asked geologist Hayley Cawthra to name the types of stones found in the Mossel Bay area.

With regard to the stones numbered 1 to 6, in the picture below, Cawthra said: Hayley Cawthra identifies each of these stones.

Cawthra says of the map below:
"The oldest rocks in the area are shown in brown and are the Kaaimans Group shales. These were intruded by the Cape Granite Suite and in this case, are represented by the George Pluton which is pink on the map and crops out along the coast east of Glentana towards George.

"The blue deposits are the Table Mountain Group sandstones and in this area, are specifically the Skurweberg Formation quartzites. "Quartzite is a rock made up of almost 100% quartz crystals and in the Cape, it has been lightly metamorphosed or modified by higher-than-normal temperature and pressure conditions.

"Note that along the cliffed coast near Pinnacle Point, these Skurweberg Formation quartzites are draped by younger sediments (yellow) but they are clearly visible along the Cape St Blaize trail.

"The Bokkeveld Group shales (green on the geological map) have become weathered into fertile soils and as a result, are heavily vegetated and not clearly visible in the outcrops in Mossel Bay. 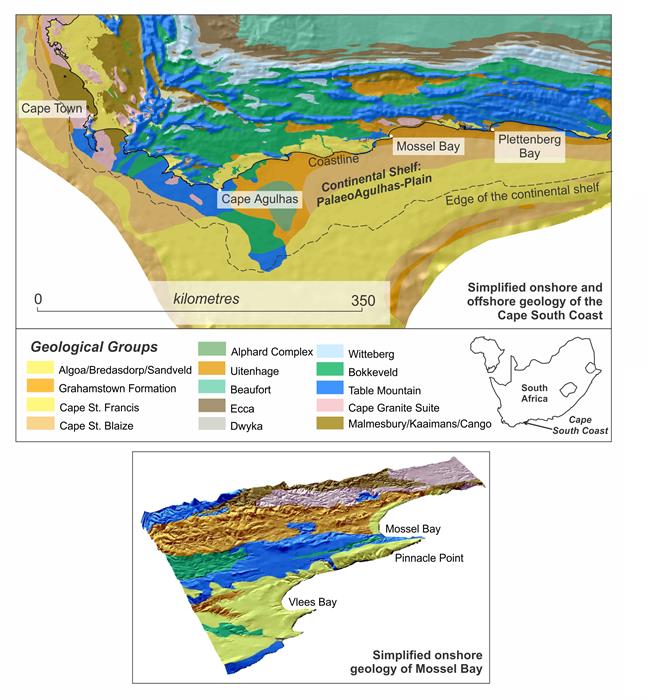 Indian Ocean opened
"The Cape Fold Belt was deformed into the mountains we know today. Following this compression, the supercontinent Gondwana broke up and the Indian Ocean opened. Then the orange Uitenhage Group rocks were laid down.

"Be sure to look out for fossils in the rocks from the Robberg Formation, which are used in the buildings of Mossel Bay. During the break-up of the supercontinent Gondwana, this pulling apart resulted in structural deformation in older rocks.

"Small fractures that formed in the Skurweberg Formation quartzites were infilled by quartz mineral fluids. These "stripes" are often white and are commonly observed in the rocks of Mossel Bay.

"The youngest geological deposits in the area are beach and dune rocks, laid down on ancient coasts above and below the present coastline. These are best seen at low tide between Hartenbos and the the Great Brak River mouth, as well as on the Dana Bay beaches. "The above-sea-level outcrops at Little Brak and Dana Bay are some of the best examples worldwide of the coastal rock remnant of an 11m higher-than-present sea level."

Cawthra has a PhD in geological science from the University of Cape Town. Her PhD thesis was titled, "The marine geology of Mossel Bay". She points out that geologically, the seabed is much the same as the land.

She is the chief geologist: marine geoscience at the Council for Geoscience Western Cape regional office and she is a research associate in the African Centre for Coastal Palaeoscience at Nelson Mandela University.

For more information, go to www.geology.com. This useful website explains the three different classifications of rocks - igneous, metamorphic and sedimentary - as well as the different rocks in these categories in simple, easy terms.