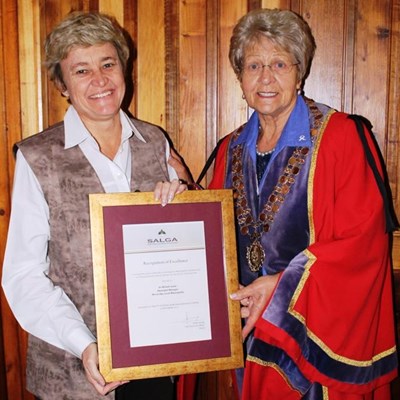 The South African Local Government Association (SALGA) awarded the Municipal Manager Dr Michele Gratz a certificate in recognition of excellence and leadership for the clean audits awarded to the municipality. Dr Gratz received the certificate from the Mossel Bay Executive Mayor Alderlady Marie Ferreira at the monthly council meeting on Thursday, 26 November. Photo: Nickey le Roux
MOSSEL BAY NEWS - Mossel Bay Municipal Manager Dr Michele Gratz, whose resignation this week shocked co-workers and residents of the town, has some captivating stories to tell of many highlights and successes during her tenure.
Modestly, however, she insists: "Mossel Bay Municipality is fortunate in having an excellent team of directors and very good officials who go beyond the call of duty to ensure and improve service delivery. I enjoy what I have been doing, I have spent the best years of my career working in and for Mossel Bay."
A qualified medical doctor, Dr Gratz worked in several health-related and management positions in the George Municipality for 12 years before taking the position of municipal manager in Mossel Bay in June 2009.
Although her contract only ends in May 2017, she resigned on Wednesday, 4 May. Dr Gratz's last day as municipal manager of Mossel Bay, 2 August, will coincide with the end of the term of the current councillors, immediately prior to the local government elections on 3 August.
But why?
"By resigning now I can afford the new council the opportunity to find a new municipal manager for the full duration of its term. There are not that many suitably experienced and qualified municipal managers available. Once the new term of office for the new councillors has started, the prospect of the availability of a top-class replacement will further diminish as other municipalities will also be looking to replace municipal managers.
"I am a mommy first, a wife, and I want to devote more time to my little girl (9) and husband. I have no immediate future plans, other than to invest in quality time with my family. My daughter is very happy with my decision and my husband fully supports me."
Dr Gratz admits that she was too singularly focused on her work for too long. "I cannot not think of work; I would be on holiday and still fret about whether a council agenda, for example, was correctly compiled."
Like a champion, she wants to leave at the pinnacle of her career.
Achievements
"Whatever I have done, I did with the best interests of the Mossel Bay ratepayers and the town, uppermost in my mind. I own property here; I am a ratepayer too."
One of her first challenges just after taking up office was to ensure water security for the area in August 2010, at a time when the town was experiencing the worst drought in 130 years, the water situation in Mossel Bay was critical and the town had mere days of water supply left before it would run dry. Mossel Bay was one of the Southern Cape towns in the Eden District that were declared local disaster areas because of the drought. Her drive and dedication resulted in the town now boasting South Africa's biggest seawater desalination plant.
Projects such as the waste water reclamation and seawater desalination project increased Mossel Bay's water security and now enable the town to cope with further development. Dr Gratz was the driving force in establishing the desalination and reverse osmosis plant.
Apart from this, she lists the five consecutive successful Dias and Sports Festivals the town hosted as certain highlights of her career. She initiated the town festivals and coordinated and motivated the team of municipal officials who willingly and voluntarily arranged the festivals over and above their daily job descriptions. When probed on the continued existence of the popular town festivals post her departure, Dr Gratz said the initiative now rests with the newly elected council to decide on the way forward.
The South African Local Government Association (SALGA) recently awarded Dr Gratz a certificate in recognition of her excellence and leadership, for the clean audit awarded to the municipality. Mossel Bay was awarded a clean audit for four years running in 2015. The fourth consecutive clean audit confirmed the Mossel Bay Municipality's reputation as one of the best-managed municipalities in the country. This is an achievement which has so far been attained by only a handful of South Africa's 278 municipalities.
SALGA then stated: "It is a strict audit which is not only a financial audit but covers management practices, performance management and compliance with legislation. It, therefore, attests to the municipality's sustained financial health as well as good management and the dedication and diligence of the municipality's workforce."
See the article on her most notable accomplishments elsewhere in this edition.
Read a previous news flash: Municipal Manager resigns
Click here for related articles:
ARTICLE: NICKEY LE ROUX, MOSSEL BAY ADVERTISER JOURNALIST
'We bring you the latest Mossel Bay, Garden Route news'
Posted on: 07:30 Fri, 13 May 2016
Your Comments