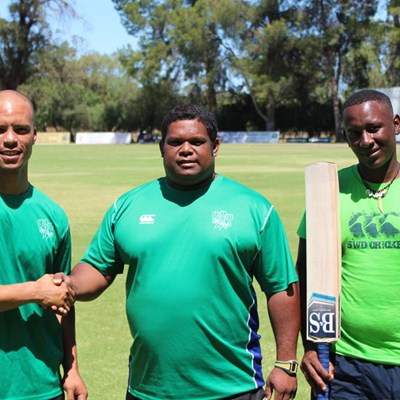 Newly appointed SWD cricket captain, Erinn Ewets (left), is congratulated by coach, André du Plessis. On the right is Sithembiso Ndwandwa, who will make his debut for SWD against Western Province.
SOUTHERN CAPE NEWS - Erinn Ewerts has been appointed captain of the SWD team for the rest of the season in the place of Waldo Lategan, who was released from his contract after accepting a job offer in Port Elizabeth. Lategan’s services was however, secured for the upcoming one-day matches.
SWD’s trip to PPC Newlands in Cape Town will be a tough assignment for Ewerts, who made his first class debut for SWD nine years ago - in February 2007. He represented SWD at school level and captained the SWD Academy team in 2010. He also represented the SA u.17 team while he was at Oudtshoorn High School.
Western Province will post a real challenge for the Oudtshoorn based team in both the three and one-day match. In the one-day competition SWD is in the second position (12 points after three matches) and is well positioned to reach the final - against the eventual pool winner of pool B.
SWD, who is unbeaten after three matches, recorded impressive victories against KwaZulu-Natal, North West and Northerns.
SWD will also be keen to record their first victory in the Sunfoil three-day competition where they are still without a victory after six matches (four draws and two defeats) and in the 7th position out of seven on the log at 35,68 points.
Sethembiso Ndwandwa was recruited from the Eastern Province and will bat in the top order whilst the young Hanno Kotze will get an opportunity for the three day match to cement his place in the team. Luthando Mnyanda is currently on loan the VKB Knights and his absence will leave a void in the batting line-up.
The SWD team for the three day match is: Neil Hornbuckle, Sithembiso Ndwandwa, Sammy-Joe Avontuur, Hanno Kotze, Erinn Ewerts, Brendon Louw, Siyabonga Booi, Glenton Stuurman, Marcello Piedt, Siya Simetu and Gurshwin Rabie.
Waldo Lategan, Pieter Stuurman and Otneill Baartman will be added for the one-day match.

Newly appointed SWD cricket captain, Erinn Ewets (left), is congratulated by coach, André du Plessis. On the right is Sithembiso Ndwandwa, who will make his debut for SWD against Western Province.
'We bring you the latest Garden Route, Klein Karoo, Hessequa news'
Posted on: 07:00 Thu, 14 January 2016
Your Comments