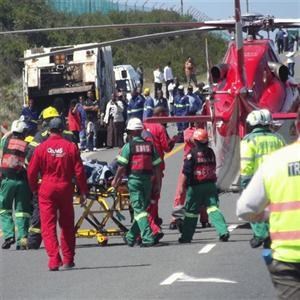 MOSSEL BAY NEWS - One man died and another was seriously injured when a municipal refuse truck on Monday overturned about 20km from Mossel Bay on the N2 National Road.

The men were on their way to a refuse site at Gourikwa Station. Both men were employed by the Mossel Bay Municipality.

It is believed that the driver lost control and the truck overturned. Both occupants, whose names cannot be released, sustained serious injuries.

One of the men was airlifted by helicopter to the Life Bay View Hospital in Mossel Bay, and the other was transported by ambulance to the same hospital. Both were admitted for multiple injuries.

One man succumbed whilst the condition of the other was described as very serious.